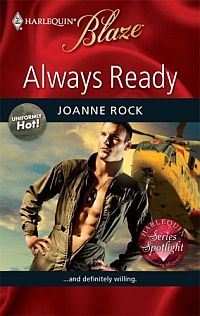 Uniformly Hot! The Few. The Proud. The Sexy as Hell.

Current Status: Always ready for action— of any kind!

Damon is accustomed to being on the lookout for illegal activity on his watch, though it’s not every day he suspects a gorgeous woman. Still, when Lacey suddenly appears at the Puerto Rico bar Damon’s staked out, to meet a suspected smuggler, Damon’s guard is up. Unfortunately, so is his libido—way up! Lacey is up to something, and Damon’s determined to uncover all her dark secrets. He’s also quite ready to uncover Lacey herself. One mysterious inch at a time…

Joanne visited San Juan, Puerto Rico to research for this book. View photos from the trip.

“Another excellent tale from the pen of Joanne Rock!” — Debby Guyette, CataRomance

The night took a downward turn the moment a hot chick stepped into the bar.

Coast Guard Lt. Damon Craig tipped back his glass of local Puerto Rican rum and determined he could pinpoint the exact second his night had gone from bad to worse. And it wasn’t just because the woman in question carried a cell phone in one hand and a laptop satchel in the other for a night at a beach surf shack. Damon considered these hallmarks of self-important tourists his personal pet peeves during a night out.

No, the woman teetering around in expensive heels at Café Rosita’s proved a problem because she kept flirting with the object of Damon’s current mission. With a delectable set of curves drawing the attention of every Y chromosome holder in the bar, the woman made it damn difficult for Damon to keep tabs on his quarry.

And he needed to watch the reputed drug runner. Damon might have entered the bar to blow off steam after a frustrating week of coming up with nothing on the operation his unit in the USCG’s Deployable Operations Group had been tasked to intercept. But then he’d spotted the reputed ringleader himself and decided to stick around and watch the guy. If their intel about Nicholas Castine was right, he wasn’t just importing Ecstasy and date rape drugs, he was also a predator himself. One of many reasons Damon wasn’t crazy about the cupcake in a yellow sundress chatting up the dirt bag.

“I could go over there,” Damon’s buddy across the table offered. Enrique Soto was a Puerto Rican native even though he’d gone to Coast Guard Academy in Connecticut with Damon back in the day. Another member of Damon’s unit, Enrique was deployed with him at the Borinquen Air Station nearby. A big guy with a personality as loud as his Hawaiian shirt, Enrique wasn’t the sort of dude people forgot— a fact that made good cover for Damon’s impromptu mission tonight.

No one tended to notice Damon when Enrique jumped behind the bar to show the locals his favorite rum concoctions or leapt on a table to start a round of Elvis karaoke.

Now, the live band’s mix of reggaeton and American pop hits filled the small cafe, vibrating along the rafters and rattling the glasses hanging upside down over the bar.

“And what do you think that will accomplish?” Damon set aside his empty glass, content to stretch out his drink orders even though he wasn’t officially on duty. He would have forgone the rum altogether except that two Coasties sliding into a bar booth without slamming a drink or two would have the locals talking in no time. That was another reason Damon had chosen Enrique for company.

Enrique’s nights off involved enough rum consumption for both of them.

“I’ll charm the broad to get her out of the way so you can keep tabs on our guy. Your guy, technically, since I’m off tonight.” Enrique picked up Damon’s empty glass and waved it around as he whistled for the waitress. “Oh, that’s right. You are too. You just forgot how to stop working for more than five minutes at a time.”

“What makes you think I’m not here to get laid? That woman in the yellow sundress is right up my alley.” Damon paid the waitress for the next round and kept his eyes on the hot chick and his drug runner target, who seemed to be having some kind of tiff.

Damon didn’t have a clear view since four other guys took turns checking out her legs and continually got in his way. But it looked like the woman had tensed, her tall, curvy form straightening in her seat beside Nick Castine.

After eight years in the Coast Guard, Damon had been in prime position for duty with the DOG-Deployable Operations Group-within his branch of the military. He liked the unit that allowed him to be anywhere in the U.S. at any given moment to respond quickly to new security threats. But this mission was about more than a job. The DOG’s pursuit of Nicholas Castine meant the chance for vengeance on a man whose crime network had infiltrated Damon’s personal life. Castine’s drugs and the party lifestyle they touted had stolen Damon’s last girlfriend right out from under him last year.

“Because you swore off women a year ago the first and only time I saw you get shit-faced.“ Enrique turned around to follow Damon’s gaze. “And if I remember correctly, you specifically swore off sophisticated city women who thought they were better than the general population.” He swung back to face Damon, a big grin on his mug. “I’d say the toots with the designer laptop case fills the bill.“

Damon heard him in a peripheral sense, but couldn’t quite tear his attention from the uptown girl who was now clearly trying to shove Castine off of her. Was she a business associate? A new girlfriend intel didn’t know about? For all Damon knew, she could be in the drug business. A buyer. A user. The dude’s meaty hands had wrapped around her waist to drag her close and she seemed to be putting a hell of a lot of effort into keeping him at bay. Muscles in her bicep and tricep flexed, her hands splayed on the guy’s chest, fingers bent back at an awkward angle at his forward momentum.

Yeah, the night was definitely taking a downward spiral. He wanted to watch this Castine guy and personally arrest his ass for providing half the U.S. with Ecstasy, Ketamine and Rohypnol, the so-called party drugs that tantalized good people into thinking the grass was greener somewhere else.

That happiness could be found in a drug-popping club or in a stranger’s bed. Memories of his former girlfriend still burned his gut. In theory, it was no surprise that crimes carried out over international waters would finally affect Damon personally since he’d been stationed at all the hot spots for drug and weapons importers over the course of his career. That’s what being in the Coast Guard meant. But he’d still been stunned when the woman he’d been living with got hooked on the same drugs he’d been fighting to keep out of the U.S.

What this chick in the lemon-colored dress needed was one of those four guys who’d been gawking at her legs to get off his lazy ass and help her away from the overeager Romeo. Whether she was involved in Castine’s business or not, she didn’t deserve the manhandling. But it seemed every last one of the gawkers just watched in salacious envy as the creep wearing Gucci-shades in a dark bar continued to grope her.

“Shit.” Tension coiled inside him. Tighter.

Enrique turned. A waitress tried to intervene. And then Damon was on his feet, not caring if he blew his anonymity in front of a guy his group needed to investigate. People who took advantage of women were on his personal list of World’s Biggest Jerkoffs. Ten strides brought him table side with Castine and the woman.

He lowered himself to eye level with the prick’s sunglasses as the guy leaned back to laugh at his companion’s Twister maneuvers.

“Didn’t anyone ever tell you that ’no’ means ’no’?” Damon counted on a surprise tactic and left the lady’s path clear out of the booth. He held his hand out to help her up as Castine loosened his hold.

“We were just getting better acquainted, weren’t we, Lacey?” The reputed drug runner straightened his suit jacket and smoothed a pink silk tie as he looked to his reluctant date for confirmation.

She stood quickly, tugging her purse and her laptop case out from under the table.

“Actually, you were just demonstrating what a lowlife you are.” She spoke English with a distinctively American accent and gave a cold nod to the jackass who’d tried to maul her. Then she spun toward Damon. “Thank you.”

With a fluff of her short, blond curls, she pivoted on her heel and swished past him, her yellow skirt brushing his knee as she went.

Half the heads in the bar turned in unison to watch her go and he knew he couldn’t let her wander around this deserted stretch of Aquadilla on her own when she was so obviously out of her element. She could spend half the night trying to talk a cab driver into taking her back to the more tourist-friendly part of town. If the cabbies on duty around were half as interested in her legs as the bar patrons had been, she’d be fighting an uphill battle.

“Looks like she’s already gotten acquainted enough,” Damon observed as he walked away from Castine’s table.He’d already hit the bottom of the downward spiral in making his quarry aware of his presence. Not even a hot chick with a bad attitude could make this night worse.