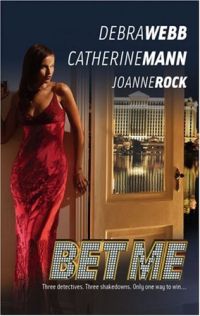 They don’t call Vegas Sin City for nothing. And now that prime tourist season is around the corner, it’s time to kick some criminal butt. Enter three full-throttle Vegas detectives, ready to eat their undercover assignments alive….

Clarissa Rivers can’t believe she’s got to play fake maid to weasel her way into some of the city’s dirtiest criminal activities.

But pretend she’s hitched, too? Meanwhile, Kim Wong is all over her undercover sting operation at the Great Wall Casino. Only problem: an old boyfriend’s got intel on Kim’s secret royal past. And Dorian Byrne is posing as a high-class call girl to take down a sex crimes ring. But what’s with her wild-card FBI partner?

High-rolling scoundrels better watch their backs this weekend, because one wrong move and all bets are off….

“Top-notch characterizations, a touch of intrigue and a generous sprinkling of humor” — Romantic Times, 4 stars

Look her in the eyes.

Be the first one to speak.

Make the apology the first words out of your mouth.

Simon reviewed his survival strategy as soon as he got the call that Dorian was on her way to his rooms. The Bureau had booked a high roller suite for him under an assumed name—Simon Rainier—to give more credence to his cover as a West Coast card shark in town for the weekend to gamble and look for girls to take back to L.A. He’d decided to extend that cover so that he could also act as Dorian Byrne’s pimp to ensure her safety during a dangerous as hell assignment. But it was that part of the role that pissed him off every time he thought about it since no man in his right mind would ever share a woman like Dorian let alone pimp her out at a profit.

He hadn’t been worthy of her a year ago, and for all his faults, at least he’d been on the right side of the law at the time. Now he had to pretend to sell her to any jerk-off with enough cash to pay for the favor?

This was one fake persona he’d have to struggle to maintain. As much as he regretted what had happened between him and Dorian in the past, he resented this approach to busting up a crime ring even more.

A knock at the door pounded in time with the quick jump of his pulse at the thought of seeing her again. He knew those quick and efficient raps were hers, the sound as straight-forward and direct as she’d always been.

God, he missed her.

Reminding himself about the eye contact and the apology as he pulled open the door, Simon broke the first rule within two seconds. His gaze plummeted from her face at the visual shock of so much black and red— the bold, direct colors well suited to a face more striking than pretty.

Her short dark hair was cropped in soft waves around her ears with one long curl draped over her brown eyes. She had vaguely Latino coloring that gave her a perpetual golden tan, a feature he hadn’t noticed as much in her usual grays and blues. But this afternoon she wore the shortest black skirt imaginable, short enough to show off the tops of her stockings. Short enough that if she bent forward just a little, anyone standing behind her would get a delectable eye full.

“Nice to see you too, Simon. Can I come in?” She arched a dark eyebrow his way, her painted red lips pursing at his rudeness.

No damn wonder. By now he’d broken all three of his self-imposed rules for this meeting and he hadn’t even gotten around to cataloging the full extent of her.

“Please.” He opened the door wider, wondering how to mend fences enough to get their job done.

The temperature dropped a few degrees when she walked by him, freezing him out with a look that men in the doghouse know well. And frankly, Simon had done his share of time there thanks to more women than he had any right to mess with.

He’d been upfront with women about playing the field before he met Dorian, but she’d cured him of that particular hunger from the moment they’d met. Too bad they shared exactly nothing in common aside from attraction. Dorian had made her feelings clear about his wild ways— on the job and off— and she seemed hard-wired to resist his every attempt to win her over except for one incredible night.

“Look, I know I’m probably the last guy you wanted to work with on this detail, Dorian but—”

“Save it, Ramsey.” She moved slowly through the living area of the luxury suite, her gaze taking in the photos of the Strip and framed prints of Monte Carlo before she turned and inventoried the frescoes on the majority of walls. “You know I’m too much of a professional to care who I work with as long as the job gets done. Even if I get stuck with a Fed.&#8221

She turned to stare out at Strip. His suite was only five stories above ground level while he knew she was on the eleventh floor. Her view was probably better, but the luxury of this suite was lavishly over the top, like so many elements of Vegas. There was a minibar beside the hot tub built for eight and round the clock, in-room massages. Simon had received comped tickets to a handful of events over the weekend too— not just as part of the suite, but also as the hotel’s way of steering his investigation toward areas where the sex crimes ring operated.

The Pompeii was eager for the police to start making arrests on a case that was costing them business and Dorian had received a solid tip that another kidnapping attempt would be launched this weekend. Local prostitutes were disappearing and— according to Dorian’s information— being sold as sex slaves to rich men who fancied seeing American women helpless. From their brief phone calls to set up the sting, Simon knew Dorian couldn’t wait to bring down the bastards.

“I just wanted to apologize for sprinting out last year. I wasn’t in a good place back then.” Major understatement.

He leaned against a marble-topped bar stocked with complimentary liquors bearing labels he’d never be able to afford out of his own pocket.

“Me neither.” She turned to face him, her arms crossed tight over the tuxedo jacket covering a hint of red lace and high breasts. “So why don’t we agree to write off the whole awkward scenario as a bad idea? Then we can get down to more pressing concerns.”

He didn’t really want to write it all off since he hadn’t offered up any kind of explanation, but then, Dorian wasn’t the kind of woman who would give a rip about excuses. She was already pulling a piece of paper out of her jacket pocket, her attitude all business despite the sex-minded attire.

“Do you really think hookers dress that well?” The comment leaped from his mouth before he could suppress it. Not that he usually did much suppressing of his thoughts, but he’d planned to be on better behavior.

At another frosty look, he tried to back up his point.

“It’s just that we don’t have much time to set up your cover, Dor, and we need as much believability for your character as we can get. If you look too high-rent, don’t you think it’ll tip off the regulars that you might not be what you seem?”

The piece of paper she’d been holding landed silently on the polished black marble bar.

“Might I remind you, Agent Ramsey, that we aren’t conducting a sting on a street corner in West Hollywood? Prostitution is legal in this state, if not inside the casinos, and some of those working women have made a very nice living from the proceeds. The Pompeii is a first-rate luxury hotel and the women who risk the wrath of security to advertise their services here dress with that in mind. Trust me, I didn’t just pull the first thing I saw out of my closet today. I researched.”

He released a whistling sigh, wondering if they’d be able to work together peaceably after all.

“O-kay. My bad.” He peered down at the paper she’d taken out to show him— a map of the casino— and was only too glad to talk about their strategy for the weekend. “Are you sure the Abundance Thoroughfare is the place to target our guys?”

The hotel had been laid out based on historic snippets about the city of Pompeii in the years before the volcano destroyed a flourishing culture. The center of the hotel mirrored an actual ancient marketplace referred to by the same name.

Simon had been briefed on her angle of the investigation—sex crimes were a growing concern to local police. But the FBI had gotten involved when a racketeering case they’d been following started sharing key suspects with the ring alleged to be responsible for the disappearance of local prostitutes. Five women had gone missing in recent months, and Dorian uncovered evidence the women ended up overseas hooked on a variety of drugs and being used as sex slaves by wealthy men until the women were eventually sold into brothels. The market for this kind of thing was small, but apparently demand for American women was steady.

Simon’s agency had been working with CIA operatives overseas to get the missing women back home, but he would be more directly involved with shutting down the operation on this end. Months of investigative work had led up to this weekend and he wouldn’t blow it by letting their personal history get in the way.

“I think it’s a good place to start.” She traced the narrow line on the map with one vermillion painted fingernail. “Most of the shops lining the marketplace are legitimate, but there are a couple that remain questionable.”

Her nail slowed as she reached two X’s drawn with pink highlighter.

“You said they have women right in the booths?” Simon hadn’t ever been the kind of guy to spend a lot of time in casinos, preferring to take risks in career-related venues so he could tell himself his recklessness served a greater purpose.

“The proprietors say the women are models, and certainly plenty of vendors use live models to showcase their wares. But the two I’ve highlighted have no accounts with local modeling agencies. I even quizzed agencies on both coasts and no one has ever sent girls to the Pompeii Casino to work for either of these places.”

“These chicks just walk around the booths doing nothing?”

“They wear watches or belts being sold by their supposed employer, but their togas are pretty risqu