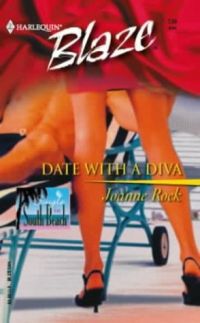 The hottest date he’s ever had!

Lainie Reynolds’s long-ignored libido has picked a fine time to wake up. Just when she’s got her hands full at her sexy singles resort Nico Cesare is in her face. The sexy former NHL star definitely is to blame for her out-of-control hormones. Since he won’t be ignored, she’ll simply have to tackle him to the sheets and get him out of her system.

The first time he lays eyes on South Beach’s infamous Diva, Nico suspects there’s a sensual goddess lurking beneath Lainie’s do-not-touch exterior. And he has to have her. She’s agreed to a sultry affair, but has made it clear that she’s too independent for anything more. But Nico’s already in deep and a series of suspicious incidents at the resort give him the perfect opportunity to be with her day and night. What better way to show her that this kind of heat lasts for a long time?

“The sex is red-hot, the emotions are realistic… a definite winner.” — Romance Reviews Today

When she’d finally put a good thirty blocks between her and Club Paradise, CEO Lainie Reynolds found a bench near the ocean and let out a breath she’d been holding ever since she stormed out of the hotel. Always conscious of her image, she hadn’t wanted to be near anyone she worked with when she allowed the stress from her hellacious day to flood through her. Setting down the flask of Kentucky bourbon on the wooden bench beside her, she let her frustrations hiss between her teeth in the form of an extended sigh.

She’d been divorced from him for almost a year now, so she hadn’t expected her ex-husband’s preliminary hearing to prey so heavily on her heart. Hell, she’d helped put the bastard behind bars after he’d cheated on her with a gorgeous younger woman, then proceeded to cheat their friends and business associates out of millions of dollars. He’d embezzled money from the resort she’d held a small share in and later reorganized, so essentially he stole from her too. He’d also cleaned out their checking account and used some of her personal money to buy up local real estate and sell it at his own profit before he skipped town.

Her divorce had been bitter to say the least.

Indulging another nip from the elegant flask she’d never had cause to use until now, Lainie breathed in the moist, salty air and willed herself to relax. She needed the soothing peace of a quiet stretch of ocean to process everything that had happened today.

The news of Robert’s hearing had hit her hard, but she hadn’t been able to think through it with a film crew arriving at the resort to start production of a new movie this week. Having Club Paradise featured in the sexiest new action-adventure drama to be released next year could really put them on the international map.

But her life was such a screwed up mess she wouldn’t be able to make the most of the opportunity unless she pulled herself together. On top of hat, it would be torturous to be around all those steamy scenes in progress while her own love life sucked.

Only when her heart rate slowed did she allow herself to drag today’s paper out of her purse.

There was a mug shot of Robert Flynn, her cheating ex, beside the headline. Underneath that picture there was a photo of her and Robert at a charity gala last spring, a huge Miami society event that had been sponsored by her law firm. It had been the beginning of the end for them since she’d caught him canoodling with some paralegal from her company during the silent auction portion of the evening. One of many in a long line of women, she discovered later.

Her eyes had been irrevocably opened that night after years of denial. Still, when the newspaper photo had been taken, that awful moment of realization hadn’t happened yet. Lainie was clutching Robert’s hand with the mindless conviction of someone who needed to be right about her choices no matter what the cost. She’d never been a clingy woman, but she’d always been certain that whatever she chose must be right by sheer virtue of the fact she’d made the decision.

So damn full of herself.

Lainie picked up the flask again, promising herself this would be her last sip. She was a one or two glass kind of woman, refusing to ever succumb to a state of being where she would be out of control. Sloppy. Or worst of all, stupid. Savoring the burn in her throat from that last swig even as she crammed the flask back in her purse, she was surprised to see tears fall on the newspaper she held in her lap.

He deserved to be in jail. She wanted him in jail, damn it. She just hadn’t counted on how much the confirmation of his criminal activity in black and white would make her feel like a first class failure.

Grateful she’d escaped Club Paradise before she lost it, Lainie let the tears dot the newsprint. Sure she’d recovered financially from the whole disaster— she left her law practice and ended up taking over Club Paradise with the help of three partners. They’d shifted the focus of the resort from a schmaltzy couples love nest to a sleek, sensuous playground for singles and met with phenomenal success.

But in all the months she’s struggled to put the business in the black, Lainie had never once stopped to put her heart back in order. Damn. Damn. Damn.

Folding and unfolding the newspaper in her lap, Lainie allowed the hurt of Robert’s betrayal to wash over her. She’d always hated being the butt of a joke, and now she seemed to be a full-blown source of public ridicule. Even now during her anonymous mini-binge on the beach she felt people’s eyes on her, as if people were pointing and staring behind her back. Ridiculous.

She would indulge the pity party for ten more minutes and then she’d get back to business. Back to her one track life. But as she stared down at the front page of the Miami Herald, Lainie spied a pair of men’s worn leather loafers out of the corner of her eye. Great. Just what she didn’t need. Witnesses to the damn pity party.

Apparently there were eyes on her after all. With any luck, those eyes belonged to someone who didn’t have a damned clue about her hideous mistake.

Thankfully, the shoes stepped back again, away from her and her personal dark cloud. But just as she breathed a sigh of relief, the shoes came back. Closer. Paused.

Irritated, Lainie arranged her features in a death stare guaranteed to set any man on his ass. As she lifted her chin and spied the rest.