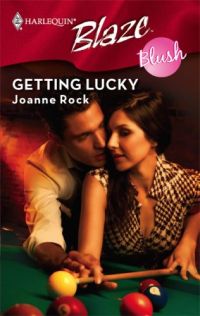 He’ll do anything to get lucky again!

Sports agent Dexter Brantley used to be the luckiest guy on the planet. But between the house fires, car wreck and half his clients dumping him, “Dex the Hex” is a wreck. Worse, there’s a rumor floating about a family curse. If he weren’t so paranoid, he could swear someone is out to get him!

It’s time to take action. Ordinarily Dex would never spend the weekend with a paranormal hunter-even the very hot Lara Wyland-but he’s desperate. Still, with one sexually charged moment Dex doesn’t have to be psychic to know he’s about to get lucky. Again and again…

Blush — Because sex doesn’t have to be serious.

“Getting Lucky (4 1/2) by Joanne Rock has hot sex, a spooky mystery, an isolated island cut off by a storm, ghosts, danger, and romance—not to mention the perfect ending.” — Romantic Times, Top Pick

“Charming! Put the cynic and the psychic together, throw in some serious sexual tension, and you have a sure winner” — Romance Junkies

“Joanne Rock writes them hot and scorching and Getting Lucky proves that she is also a fantastic mystery writer…” — Fallen Angels Reviews, 5 hearts

Ten years of representing some of the nation’s top athletic talent had earned Dexter Brantley a reputation as a lucky bastard. The epithet was sometimes shouted in anger as in the time when a lucrative endorsement deal with a new shoe company— founded by a former college roommate— earned he and his clients tens of millions. Sometimes the moniker was spoken in dazed wonder, as in the time a snooty skating star had been reluctant to sign with him for fear of sacrificing her precious art for the sake of fat professional contracts until she’d seen exactly how much money Dexter could flood into her bank account.

In one of the most successful rises to the top of sports agenting imaginable, Dexter didn’t mind the nickname no matter how it was used. And right now, as he sat in a nine-car pileup on the George Washington Bridge during the morning rush hour with a hundred cars honking behind him, he decided he’d give anything to feel like a lucky bastard again.

His cell phone rang while an emergency vehicle threaded through the pandemonium behind him, blocking out the shouts of a pissed off Turkish cab driver waving his fist just outside Dexter’s smashed-up new Escalade.

Ignoring the cabbie and the steaming wreckage of a bread delivery truck silhouetted behind him, Dex answered the call and spoke into the headset that never left his ear while he was in the car.

“Brantley. What do you have for me?”

“Trish, I’m going to need you to handle this one for me.” Dex fought the urge to jump into the brawl the cabbie so obviously wanted now that the guy’s sweaty nose was pressed to the window right beside Dex’s ear while he screamed at him. “There’s a huge mess on the George Washington. A tractor trailer rear-ended a bread truck that slid into a whole slew of other—”

“No, Dex.” Trish’s voice was firm. Resolute and totally unsympathetic. “You’d better be on that elevator on your way up here now because Mark Setano’s wife is totally losing it in the waiting room. I think she just tore your autographed Bucky Dent jersey off the wall.”

Through the growing fog of condensation on the driver’s side window, Dexter heard a banging on the car and decided he was ready to give the cabbie the fight he wanted.

“If she hurts that jersey, I’m suing,” Dex explained to Trish before he tore off the headset and forcefully threw open the car door.

Right into a cop who had apparently come over to ask about the accident.

The officer doubled over for only a moment before he semi-straightened with a snarl on his red face.

“Oh God.” Dex reached to steady the guy or extend an apology. Hell he didn’t know what to do.

“It’s his fault,” the cabbie chimed in, pointing to Dex as he spoke in silky smooth English. “He was driving too fast, zipping in and out of the traffic on the bridge.”

“Wait—” Dex could see the tenor of this conversation and realized his day was going to hell even faster on this end than it was in his Manhattan office right now.

The officer straightened fully now, his injuries apparently not keeping him from reaching for the pad of paper inside his jacket. The pink and yellow papers were for traffic violations and God only knew what else. Swiping away a small spot of blood from his nose, the cop looked meaningfully at Dex and then back at the cabbie as he clicked open his pen to get started.

Dex slumped back against his car door, unwilling to open his mouth again since he had a way of making more trouble than he cleared up lately. Ever since he turned thirty-three and the rumors of the Brantley family curse surfaced out of ancient history to bite him squarely in the ass. A house fire had burned his Aspen home to the ground two months before his Manhattan apartment had experienced an electrical fire. Two of his biggest earning athletes had left his agency and four others had followed when a national news wire picked up some hometown history article about a bunch of his dead relatives.

Looking around at the traffic pileup behind the steaming hoods of wrecked cars and slow-moving emergency vehicles, Dex knew he couldn’t avoid taking action to curb the downward spiral of the last six months. No one was calling him a lucky bastard anymore and he didn’t realize until just this minute how much of his business had been built on that image.

He needed his luck back. And right after the cop finished writing the third— no, make that the fourth—ticket, Dexter would swallow some pride and risk his libido to make the only phone call he could think of that might help the situation.