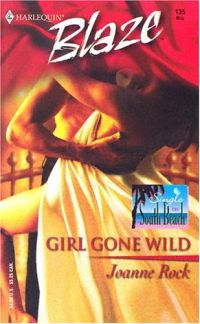 What All-American male could resist a sugarcoated seduction?

Journalist Hugh Duncan can sniff out international intrigue, but finding a juicy scoop in a Miami singles club right under his nose? Could a voluptuous chef, singing a siren song while icing a Kama Sutra cream puff, be his next big story-or is she just a luscious piece of fluff? And if the kitchen contessa insists on giving out free samples-well, there’s an offer no gentleman should refuse…

Giselle Cesare has a history of stirring up trouble, and not just on her stove. Even so, the minute a handsome reporter wanders into Club Paradise, she knows she’s struck gold. By the time their first date draws to a close, Giselle has hit on the secret to spontaneous combustion! Unfortunately, if Hugh persists in digging up her past, more than her sexplicit desserts will be exposed!

Peering out of the dark windows overlooking a deserted stretch of Miami’s South Beach, he strolled through one of the quiet lounges at the back of the posh resort he was supposed to be investigating for his newspaper. At 4:30 a.m., the raucous partiers who had populated the hotel’s nightclub had just stumbled out into the early morning air, leaving this section of the resort suddenly quiet. Secretive.

Skirting around a secluded seating area in one corner of the minimalist Art Deco-style lounge, Hugh searched for a diversion to occupy his mind through what had always been his most restless hours of the day. He’d never been one to fall asleep until at least six a.m., preferring to roam the streets of whatever city he happened to inhabit, looking for his next story. Some kind of intrigue he could write about, dissect, rant over.

Nine times out of ten, he unearthed the kind of intrigue he preferred by simply watching. Observing details in a manner he’d come to realize was unique. The quirky way he’d always been able to fixate on the small, the seemingly insignificant, gave him an edge as an investigative reporter.

It also annoyed the hell out of most people, but how many guys had turned their most irritating habit into a Pulitzer? Annoying or not, he continued to indulge the practice, even in the case of stories he didn’t want to write.

Pivoting away from the picture, he considered heading for the next exit to see what he could find on the South Beach strip to entertain himself when a woman’s voice lifted in song caught his ear.

Whoever warbled out “Summer Wind” might not have the greatest vocal ability, but he had to appreciate the musical selection. He probably wouldn’t be able to find a cover of a Sinatra tune playing anywhere else on the strip. Besides, he wouldn’t unearth any material for the story he was being coerced to write on Club Paradise if he left the premises tonight. A stupid assignment more suited to a features reporter than a hard-hitting investigative journalist, but his editor was determined to take a piece out of Hugh’s hide for an article he’d written that had stepped on the toes of British intelligence.

As if a month’s worth of crappy assignments would make Hugh stop writing the kinds of stories that truly needed to be told.

Winding through the back halls of Club Paradise, flagrantly ignoring the “Employees Only“ signs on one door after another, Hugh followed the source of the “Summer Wind.” He could claim a distant, step-cousin style relationship to one of the owners of the resort since his uncle had married founding partner Brianne Wolcott’s mother at some point. Of course, his whole family was one big mass of step-this and ex-step-that and he’d never actually met Brianne. No one in the Duncan or Simmons families had much of a track record in the marriage and family department.

Still, the relationship ought to be enough to justify his presence in the Employees Only sections of the resort, right? Scents of garlic and basil assailed his nose as he neared the kitchen, making his gut rumble in hungry approval. When was the last time he’d eaten? Snacking wasn’t usually a part of his late-night spying rituals, but the distinct aroma of Italian cooking made him rethink his nocturnal surveillance traditions.

He paused just outside the door to the source of the incredible aromas, the feminine voice within hitting a high note and luring him with her siren’s song.

Curiosity beyond professional interest pulled him closer to the doorway. The dynamic Sinatra rendition, even without musical accompaniment, coupled with the incredible scents had him salivating for a glimpse of the songstress. And— truth be told— the recent glimpse of the poppy had probably stirred his interest a bit.

But the one benefit to being back on U.S. soil was the freedom to engage in casual sex— a pleasure he never afforded himself while abroad. And from the way his body had kicked into overdrive at the sound of the woman in the next room, he knew he couldn’t put off some serious fulfillment in that department for too much longer.

With the silent feet and stealthy grace that had long supported his nightly habit, Hugh nudged open the door and edged his way into the room.

Only to discover his efforts to be sneaky were totally wasted on the oblivious creature stirring up mayhem in the center of her kitchen.

She held a wooden spoon in one hand and a bag of decorator frosting in the other as she whirled between a granite-topped island and an eight-burner cooking range loaded with steaming cauldrons.

Dancing as she worked, a petite brunette in a sexy-as-hell red dress did a bump and grind as she bent over a shiny aluminum cookie sheet and applied frosting to some confection or another. Her abundant hair was pinned up on the back of her head in some little confining net, but a few wavy strands escaped to bounce in time with the rest of her.

Sinatra’s music had probably never enjoyed such an enthusiastic performance.

He debated breaking out in applause as her voice died on the final strains of her song. Odd, because he’d always been a disinterested bystander on his other nighttime investigative outings. Why the sudden urge to blow his cover and announce himself to this brown-eyed beauty?

Maybe it had something to do with the fact that the lithe little brunette emanated more sheer physical presence than many men twice her size. Or maybe it was because her dress happened to be the exact shade of the provocative poppy flower he’d spied in the hallway.

Then again, maybe it was simply because he’d never seen a woman so full of life she practically bubbled over like one of those steaming pots on the stove. Before Hugh could make up his mind either way— to reveal himself or not— the woman launched into a rendition of “Witchcraft” as she twirled over to the range top to stir the cast-iron cauldrons wafting the rich aroma of what could only be spaghetti sauce. She dipped her wooden spoon into the first batch and spun it clockwise, counter-clockwise, then back again before moving to the next pot where she repeated the process.

He watched, mesmerized, as the woman worked her own brand of witchcraft on him. Since when did he go for domestic goddesses who appeared totally at home in bare feet and wielding a spoon? His tastes usually ran to women on a mission. Only serious, crusader types need apply. And this woman looked about as far from serious as a man could get. Especially when she licked the remnants of spaghetti sauce off the ladle after stirring the final pot. She flung the instrument into a sink and paused in her singing long enough to kiss her fingertips in the classic Italian effusive gesture that meant “delicious.”

Damned if he didn’t feel that kiss from all the way across the cavernous room. The wealth of cool, stainless steel surfaces in the industrial kitchen didn’t come close to making the space less intimate.

Intrigued for all the wrong reasons, Hugh settled a shoulder into a wall of locked rolling carts filled with clean dishes. Willing away thoughts of the expos