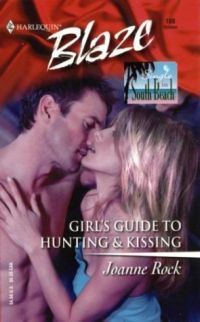 For every attraction…When it comes to breaking the rules, Summer Farnsworth is an expert. From her wild braids to her vintage bustiers, she lives by her own guide. So how can she explain her attraction to Mr. By-the-Book, Jackson Taggart? Sure the guy is gorgeous with to-die-for shoulders, but she can’t get to those shoulders through all the starch in his shirt! After a few steamy kisses, however, she’s willing to play by the rules of seduction…if only for a day or two!

Jackson knows that life with Summer would be simpler if he just wanted a fling. But something about her uninhibited ways has him captivated and he knows it will take more than a few weeks to satisfy his desire for her. In fact, it could take forever. So, armed with a few sensual moves, Jackson begins his campaign to persuade Summer that the best sparks fly when opposites attract…

“The wildly successful introduction to this series, “Single in South Beach” receives a perfect encore with Girl’s Guide to Hunting & Kissing.” — Word Weaving

“Girl’s Guide to Hunting & Kissing is a great contribution to what continues to be a steamy hot, fun-filled ’Single in South Beach’ series.” — Roundtable Reviews
<h2Excerpt:

…Summer peered toward the door again, her skin tingling along with that overactive sixth sense.

Then again, maybe her skin simply tingled from thinking about her favorite seduction scenario.

“I’m right there with you.” Brianne stood, her eyes now glued on the miniature surveillance monitor she’d installed in a sort of wristwatch contraption. “But for now I’d better go check the security and make sure things are running smoothly around the club tonight.“

With a few more exclamations over the bordello, Brianne was out the door, leaving Summer by herself to unload the exotic lingerie costumes into a decorative armoire.

She turned back to the task, hanging corsets and merry widows from quilted pink hangers in the cherry cabinet.

Yet the maddening sensation of being watched returned. Spinning around, she followed her instincts this time, unconcerned if she was being paranoid. She skirted the settee and hustled to the open door frame. Leaning over the housekeeping supply cart, she poked her head out into the corridor and saw nothing. No one.

Brianne had disappeared in the hallway and no one else lurked there.

Okay, so she was definitely paranoid. Easing back into the bordello, Summer edged around the housekeeping cart. The satin ties on her bustier trailed over a stack of fresh towels and a shiny silver box.

No. A cell phone.

She reached for the item. As her fingers grazed the cool metal it started to vibrate.

A shivery sensation skated through her for a split second, confirming that she’d denied her sexual impulses for too long.

Jiggling the stack of cotton towels beneath it, the phone hummed and then emitted a shrill ring. Never a woman to mind her own business, Summer unfolded the sleek case and willed away the stray tingles humming through her.

“Hello?” She tucked back into the bordello, hugging the phone to her ear with one shoulder.

#8220;Thanks for picking up.” A smooth and sexy masculine voice rolled through the airwaves. “I’m trying to track down my cell phone so I thought I’d ring the number and see what happened.”

He’d ignited a lonely woman’s libido with a vibrating phone. How perfectly clever.

“You seem to have misplaced it on a housekeeping cart.” She glanced back at the maid’s apparatus and wondered what the man on the other end of this amazing voice might look like. “Right between the triple milled French soaps and the lavender hand lotions.”

“Of all the places to land in an exotic hotel, I get stuck in the rolling soap supply station.”

“Actually, the soap station was teetering on the threshold of the Bad Girl Bordello. I call that kind of exotic.” A smile warmed her insides. When was the last time she’d flirted with a man?

“Now that sounds more like it. I don’t know how my phone ended up there but I did wander through the resort earlier tonight before I went into the bar. I’m Jackson, by the way. Would you mind if I came by to pick up the phone?”

Mentally she reviewed why that wouldn’t be a good idea. She should meet him in a public place like the lounge just in case he was a serial killer. Then again, she could always just ask Brianne to check on her in a little while.

“Sure. I’m Summer Farnsworth and the phone will be with me in the bordello.” Could she help it if her inner bad girl still made occasional appearances? “It’s on the ocean side of the main floor.”

“I’m on my way.” The line disconnected as she folded up the phone.

Hesitating a moment, she opened it again and placed a quick call to Brianne to make sure her friend would keep an eye out for her tonight. Brianne’s experience with a creepy stalker had made everyone at Club Paradise a little more cautious.

That done, Summer was feeling less paranoid by the moment. In fact, she felt downright eager. She suspected she was about the meet the man behind the eyes she’d sensed on her this evening. Her every intuitive, Aquarius impulse told her so. Instead of frightening her, however, the thought only heightened her anticipation.

This gu— Jackson— had gone out of his way to hunt her down and meet her. He’d used a very non-traditional means that could turn a girl’s head. Maybe he was the kind of sexy rebel that had always attracted her. And while she had tried to outgrow the flings of her youth, she couldn’t deny a hot, quickie interlude with a mysterious stranger might be just the cure for her recent restlessness.

Which left her with only one thing to ponder.

Would tonight’s Mistress of the Bordello leave her bustier ties opened or closed?