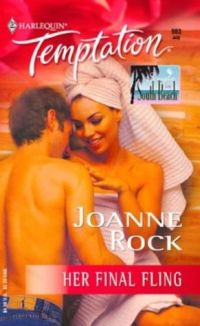 The last thing Christine Chandler expects when she takes this job is to be distracted by jet-setting Vito Cesare. She should be focused on the landscaping that could make her company a success. Instead, her gaze constantly strays to Vito’s hot bod. And by the sizzling looks he sends her way, he’s thinking the exact same thing. Can she give into this particular temptation and walk away unscathed?

Spending time with Christine is doing crazy things to Vito’s libido. Yet every time he makes a seductive move, she slips away…until he proposes a fling. No hassle, no strings, just a lot of adult fun. But after just a few steamy kisses, he’s breaking those rules and feeling much more than heat for her. Looks like he has to convince her that this will be her final fling!

Nightlife on the Strip just got a little hotter…

“Once again, Ms. Rock has written a sexy, often poignant, sometimes humorous story that can be savored again and again.” — Cataromance

“Please take your hands off my firebush.” Christine Chandler stared down the man taking too many liberties with her delicate red petals.

Was the urge to manhandle somehow tattooed across the Y chromosome?

“Excuse me?” The sexy stranger dressed in a charcoal gray suit with the jacket unbuttoned and tie undone slid his hand away from the dewy softness of the unfurling bud.

Sighing, Christine nudged past the man who’d appeared out of nowhere on the Miami property she was currently landscaping.

“The firebush is very delicate and I can’t afford to disturb the blooms before I transplant it.” She swiped a wrist over her sweaty brow, wondering why she bothered when the man clearly had no business being out here in the sweltering Florida sun. But maybe he was just a nosy neighbor looking out for Mr. Donzinetti’s property. The old Italian eccentric who’d hired her couldn’t have been nicer, so it only made sense he’d have a few friends in the suburban Coral Gables neighborhood. “I need to get back to work before my roots start to dry, but if you’d like to leave your name, I’ll let the owner know you dropped by.”

Christine smiled politely even though her mind was already taking silent inventory of the shrubs she still needed to plant along the rock facing of the sprawling, sixties-style ranch house. She didn’t normally make time for too-handsome men wearing flashy gold watches and expensive sunglasses— even when she didn’t look like the Swamp Thing reincarnated. But she sure as heck wouldn’t bother kowtowing to a guy whose suit probably cost more than her last month’s rent now when she had ten pounds of dirt under her fingernails. Where were her gloves when she needed them?

She just needed to suffer his picture perfect presence long enough to be sure she didn’t offend one of Giuseppe Donzinetti’s friends.

“You say you know the owner?” Mr. Armani sounded doubtful of the fact as he surveyed the property in the relentless heat of the southern Florida afternoon, then turned his sleek black wayfarers toward her.

All five feet, four filthy inches of her.

Well fine, if that’s the way he wanted to play.

Shoving her dirt-covered spade into an open loop on one leg of her cargo shorts, Christine used both hands to lift the large firebush her uninvited guest had been examining when she discovered him. She hauled the shrub toward the new hole she’d just finished digging for her latest landscaping project.

The project that would make or break her fledgling landscape business. The same project that had such a tight deadline no other designer in town had been willing to touch it. Only someone as desperate as Christine would try to complete this total lot makeover in six weeks for a late summer wedding.

Edging around her unwelcome visitor, she resisted the urge to trail a muddy root across the fabric of his trousers. Would serve him right for getting in her way when she needed to be working her tail off today.

“Obviously I know the owner or I wouldn’t be sweating like a pig to improve his property in the god awful Miami summer heat.” Okay, so maybe that came out a little testier than she’d intended, but for crying out loud. It’s not like she was carrying a color TV out of the house. It had to be obvious to anyone— even a flashy Adonis whose eyes were hidden behind Oakley sunglasses. Those shades of his couldn’t dim his vision that much, could they?

Settling the bush into a the perimeter of a small garden designed to attract hummingbirds, Christine reminded herself not to be prejudiced against Mr. Pampered just because he reeked of wealth. No need to be biased because she had simple needs and simple values. And no money.

“I’m sorry.” He followed her across the yard in the sweltering heat, his dark leather shoes squashing through several yards of tilled ground to reach her. “I’m Vito Cesare and I happen to own this house jointly with my siblings.”

Fingers faltering in the dirt she’d begun gathering around the firebush, she peered back up at the man with a name straight out of the Godfather.

Taking in Vito’s whipcord muscles that no amount of European tailoring could hide, she allowed herself a more careful inspection of her visitor. Dark brown hair grew too long around his face, while a neatly shaved patch of hair around his chin gave him a dissolute, Johnny Depp look. But his killer bod and custom-made suit belied the image.

“Like what you see?” He pulled off his shades and surprised her with keen hazel eyes instead of the brown she’d expected.

“Frankly, no. I was just thinking to myself that there isn’t a chance in hell you’re the owner’s brother.” Giuseppe Donzinetti had been dressed head-to-toe in clothes from the Gap. A neat, energetic little man, he’d talked with his hands as he’d ambled all over the sprawling Coral Gables yard to describe what he wanted her to accomplish.

“Who hired you? Was it Nico? Renzo? Marco? I know it couldn’t have been my sister Giselle because I just talked her a few days ago.”

“Good Lord, how many of you are there?” Giving up her efforts to bury the shrub roots, she leaned back on her heels where she kneeled in the dirt. “And I didn’t contract with anyone named Cesare.”

Suspicion mounting, she rose to her feet. “Which leads me to wonder what kind of line you’re feeding me.” No man would ever trick her in a web of lies again. Least of all a guy named Vito who looked like trouble from the start. She’d been reeled in, hook, line and sinker, by a too-slick Internet Casanova last year who’d wooed her with poetry and promises before proposing online. She didn’t realize until she’d gotten an irate phone call from his wife that she was one of eight fianc