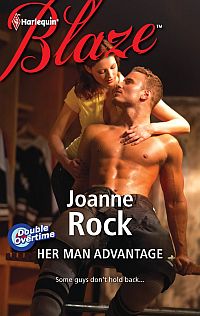 By rights they should have hated each other.

Filmmaker Jennifer Hudson doesn’t want to make a hockey documentary any more than hockey defenseman Axel Rankin wants to star in one. But neither of them anticipated the molten rush of pure lust for each other and they can’t help but give in, on and off camera…

The last thing Axel needs is a camera shoved in his face, probing into his life and his rocky past. Especially if the woman calling the shots is a mouthy, assertive, drop dead sexy redhead—who makes him want to do things that definitely require an adults-only rating!

His favorite game just got a whole new set of rules.

“I’m not signing the waiver.” Hockey defenseman Axel Rankin placed the sheet of paper on the desk of the Philadelphia Phantoms’ head coach, Nico Cesare, hoping like hell his refusal wouldn’t be a big deal. He couldn’t be a part of the TV documentary series that would follow his team over the next month. “There are enough guys on the team to film. Besides, I’m the defensive goon, not some big headliner.”

The native Finn kept the real reason to himself. Axel couldn’t afford to have his personal life broadcast to the world, the details of his day-to-day in the U.S. available to old enemies back in Finland. He’d worked too hard to put that past behind him. Having a camera crew follow Phantoms players around day and night would only resurrect old problems.

“Bowing out is not an option.” The coach, a former goalie and one hell of a leader, passed the waiver back to Axel, not even looking up from a competing club’s roster filled with margin notes. “The league needs the publicity and the Phantoms need the exposure. The dictate from corporate is that everyone participates.”

Win as a team, lose as a team. Axel had been hearing the same mandate since arriving in Philly on a trade six weeks ago. Cesare’s refusal to back off that policy had helped his hockey club earn a spot in the Stanley Cup Playoffs, which would start next week, but that die-hard commitment would make it tough for Axel to cut loose from the group now.

Shit. He ground his teeth, sweat dripping down his forehead from the morning practice session where he’d gone hard from whistle to whistle.

“I’ve got personal reasons, Coach.” He hated to go there. Waving the “it’s personal” flag felt like a cop-out.

Cesare finally looked up, his dark eyes meeting Axel’s in the austere office decorated with pictures of his two kids and hot, blonde lawyer wife. Other than that, the space was like a computer geek’s ode to hockey, full of stats and charts, roster breakdowns of twenty different varieties.

“Then you’ll fit right in with the rest of us, Rankin.” He tossed his ballpoint onto the desk and threaded his hands together as he rested the palms on his head. “I’ve got two players who didn’t want to sign because they’re afraid their wives will get wind of their extracurricular activities on the road from watching the show. I have three guys who don’t want their kids referenced in any way, including me. I’ve got a superstitious player who thinks the cameras will mess up his game rituals. The documentary is shit. I get that. But we’re all doing it and we’re all signing.”

Axel heard the unspoken ultimatum. Sign now or you’re not a team player. Or worse—benched.

He hadn’t risen up out of a Helsinki ghetto to play on a championship-quality team only to be sidelined now. He’d have to find a way to protect his Stateside foster family from his past if—when—it came calling. Swallowing hard, he picked up the pen his coach had cast aside.

Carefully, he inked his Anglicized name on the appearance waiver, knowing damn well that Axel Rankin wasn’t far enough from Akseli Rankinen to fool anyone back home. He was sure his old motorcycle gang kept tabs on him. Waiting for the right moment to call in a favor or blackmail the hell out of him. He figured the only reason they’d waited this long was to ensure his net worth went up along with his newfound success.

“Good man,” Nico Cesare assured him, snagging the signed agreement before Axel changed his mind. “You did well in practice this morning. I’ve got you on the starting line tomorrow night.”

Hard-won praise from a…