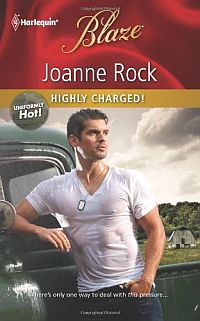 Current Status: On leave…and on alert!

Mission: Getting mentally prepared for his next mission.

Obstacle: Getting Nikki Thornton out of his head…and into his bed.

All Professor Nikki Thornton wants is to fix up the home she’s inherited from a friend. The place is run down, and she’s at her wit’s end dealing with her friend’s hostile relations. On the upside, she has a droolingly hot neighbor—whose late-night workouts offer seriously panty-vaporizing entertainment….

Explosives expert Navy Lieutenant Brad Riddock is on enforced R ’ R…but it’s rapidly becoming more racy than restful! When Nikki receives threatening letters, Brad immediately offers his protection—his very personal protection. But his leave is soon over, and the threats to Nikki’s safety are escalating. Will this volatile situation bring them together…before it tears them apart?

“Explosive passion, and intensely romantic…Joanne Rock’swriting is just as Highly Charged! as the title.” — Cataromance, 5 stars

“Unique and delicious details… Wow! Is the first word that came to mind.” — Fictional Bookshelf, 5 stars

“Criminy!” Nikki Thornton punctured her thumb on a thorn from a locust tree branch in her haste to clean up the yard.

A literature professor who was completely out of her element in the landscaping department, Nikki balanced on a step ladder at the edge of her recently inherited property, a home and extra acreage that had belonged to her friend and mentor, Chloe Lissander.

“Of all the luck,” Nikki muttered, tugging off her work gloves to assess the damage. She’d been trimming low hanging branches in a quick sweep of the property before the local historical society came in to assess its potential as a historical site in two weeks. She could not afford to screw up her chance to honor the memory of the only person who’d ever really been there for her.

That interview had led to a life-changing friendship with a woman who’d been an inspiration on so many levels. Chloe had become like family to her since Nikki’s parents had never been all that interested in the role. Even so, no one had been more blown away than Nikki when Chloe had followed through on her promise to leave the semi-rural Virgina Beach property to Nicole upon Chloe’s death six months before.

Chloe’s relatives were still in an uproar over it. And as much as Nikki hated to deprive them of the charming farmhouse and surrounding property that had been falling into disrepair for decades, she could not ignore Chloe’s wishes for the place. Chloe had entrusted Nikki to live in the home and bring the place back to the simple configuration it had in her childhood – before her stepbrother had added on sheds and outbuildings that didn’t fit with the farmhouse’s character. Chloe also had visions for having the place designated as a historic site where visitors could come to view some of the spots she’d written about in the diaries. Nikki had grieved for the loss of her friend for months while Chloe’s relatives fought over the will. But by now, the probate had been cleared and Nikki had every intention of making Chloe’s final wishes for her old home come true.

As soon as she got some antibiotic for the thorn injury.

Setting aside her clippers, Nikki figured the wound was a sign she should quit her work for the day. Tomorrow would come soon enough and she had a to-do list a mile long to get the home ready for her meeting with the historical society. She was about to climb down her step ladder when a light in the window of the small house next door caught her eye.

Was it dark out already?

She blinked with surprise at how well she could see into the house – the only other home visible from her property. There were no curtains on the windows, just a set of blinds still open. She hadn’t gotten a chance to say hello to the neighbor since she knew from Chloe that the lone resident was a military guy who was gone most of the time. Iraq, most recently.

Although… he certainly wasn’t in Iraq right now. Because there he was in all his buff glory, standing in the window half-naked.

Her mouth went dry at the sight. Her stinging thumb quit hurting.

Taut muscle everywhere. Bronzed skin like a man who’d spent long days in the sun even though it was only April. His hair was dark and slick against his head like he’d just emerged from the shower, a fact underscored by the fact that he had a towel slung low around his hips.

Really low. As in, follow the dark line of hair south of his navel type low. He stalked over to the middle of the sparsely furnished space – a living room, she thought – and retrieved a remote for a big-screen television that he flipped on with a press of his thumb. When he turned to chuck the remote back on a crate that served as a coffee table, Nikki noticed one leg had been swathed in gauze up to his knee. An injury of some kind – far worse than the lame hole in her thumb.

Her heart sped at the sight of him. She hadn’t meant to spy on him, but she could hardly look away now. A hockey game filled the screen behind him, the V of his back making for more compelling entertainment for her than anything carried by a major network.

In a word – yum. A formidable command of the language could find nothing else that summed it so perfectly.

As she stood there, the towel-clad stud turned to face her. Laser-blue eyes flashed on her and for a moment, she was terrified he’d caught her leering at him. Crouching behind a low hanging branch, she tried to hide herself in the overgrown foliage she’d been trimming.

But then he reached for the cord on the wooden blinds at the window and yanked it sideways, slowly disappearing behind the slats. The view went dark, leaving Nikki breathless and buzzing with a physical hum that could only mean one thing.

G.I. Joe had turned her on more in a ten-second peep show than most of the guys she’d gone out with in her spotty dating history. And damn, but that felt much too shallow of her. For a well educated woman, she sure had gotten carried away by the sight of great abs. A powerful set of shoulders. Then there’d been that intriguingly rugged landscape the towel had hidden when he’d turned toward her…

Not that she had any business thinking about that. Chastising herself for ogling an unsuspecting stranger, Nikki climbed down the ladder and wondered what Chloe would have said if she could have seen her just now.

Screw the landscaping, honey, go knock on his door!

Her friend’s voice in her head was so vivid that Nikki had to laugh out loud. Unfortunately, she’d never been as sexually adventurous as Chloe Lissander, whose personal love life had spurred six diaries and eight volumes of fictionalized erotica. Maybe one day. After she’d gotten the house classified as a historical site, fended off Chloe’s relatives who wanted to sue her for the place, and found the two missing diaries that Chloe’s publishers needed to re-release the full set in their original, uncensored form.

Her fantasies about G.I. Joe would have to wait. Although now that she knew about the view from under the locust tree, Nikki wasn’t entirely sure she’d be able to resist the temptation to trim the branches as frequently as possible. Because although she hadn’t reached a point in life where she could afford to be less academic and more sensual, a girl could always dream…