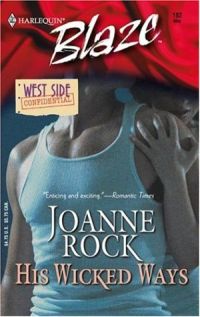 2300 HRS: Subject debriefed at length at his place of residence, during which time Officer deems him to be impressively armed and very dangerous. Subject ready to deal. Will expose his highly secret activities…but only if Detective Torres agrees to extended undercover ops with him!

“Joanne Rock scorches the pages with this sexy, suspenseful read!…It wouldn’t bother me the least to be treated to His Wicked Ways.” — Romance Junkies

“The story line is action-packed…. and never slows down.” — The Best Reviews

…Morphing out of exhibition mode and into street mindset, Alec refused to let this woman— a hard-hitting new breed of mafia princess?— get the drop on him. Lowering his shoulder, he used sheer brute force to lift her off her feet and plow her to the mat.

His next view of her was looking down at her flat on her back. A damn fine position for her, if he did say so himself.

Too bad he couldn’t enjoy it nearly long enough. Before he could talk through the finer points of his victory to his class, Vanessa kicked his legs out from underneath him, toppling him to the mat.

“Shit.” His curses ran to the far more colorful in his head, but he was pretty sure that was the only one that managed to escape his mouth. If he hadn’t possessed lightning quick reflexes, Ms. Torres probably would have ended up with his shoulder planted painfully between her breasts when he fell.

Lucky for her, he got his hands out just in time to keep him from smashing into her. Bracketing her arms with his palms to the mat, Alec held his weight off her as he stared down into assessing brown eyes.

“Lesson number one, don’t expect your opponent to fight fair.” Vanessa huffed the words into the mixture of panting breaths between them, but Alec had no doubt the whole class heard.

He’d bet his personal jet that the demonstrations had never been this interesting before.

He held himself there, taking in the soft wash of color on Vanessa’s cheeks, the lone strand of displaced dark hair twining over her neck. At last he caught her scent— a classic, simple tea rose completely unsuited for a woman who probably ate purse-snatchers for lunch.

Clearing his throat, he lowered his voice. “And lesson number two, self-defense is more fun than it looks.”

The comment hadn’t really been intended for the rest of the class. But somehow, stretched out over top of her, it was easy to forget they had an audience.

Low laughter rumbled through the onlookers.

Damn. This butt-kicking phenomenon— Vanessa— didn’t deserve that. She’d neatly beaten his ass, fair and square, so it seemed sort of tacky to undermine the accomplishment with cheap sexual innuendo.

Propelling himself up, he shoved away from her and found his feet. Time to get his class under control and find out exactly what Vanessa Torres wanted here. Outsiders didn’t just stumble on the Old School Rec Center by accident. Since she didn’t need self-defense lessons, chances were good she’d come here looking for him.

That spelled trouble any way he read it.

“I think that’s enough of a demonstration for tonight.” He extended a hand to his visitor but she ignored it, rolling to her side before pushing to her feet. “Class dismissed.”

His students shuffled out with their usual too-cool posturing, but there was a definite energy in the air as they chattered about class and compared stories of street fights they’d seen.

Far too many considering most of them were half his thirty years.

“Yeah?” He allowed his gaze to roam over her thoroughly, taking in every last detail of her skinny black jeans and form-fitting t-shirt beneath her jacket, concentrating on the way the stark fabric possessed no embellishment beyond her lean curves. “There’s more where they came from, but I’ll bet you get that all the time.”

She lifted one arched eyebrow, her expression betraying nothing about who she was or what she wanted from him. He wasn’t worried about her, per se, but he knew better than to underestimate her twice in one afternoon. Especially since he’d discovered an interesting little secret about her when they’d been romping around the mat.

“Let me rephrase that. Your moves are pretty good for a Manhattanite.” She picked up a fallen leaflet about his class that one of his students must have left behind.

“Are you trying to call me uptown?” Damned if he knew why that offended him so much. Truth be told, he’d spent most of his adult life in mid-town ever since he’d made his first million. “I grew up in Benson-Hurst.