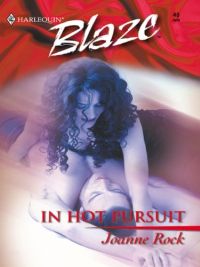 Is it the thrill of the chase…NYPD Detective Josh Winger has never been pursued like this before. Instead of focusing on his undercover investigation, he’s being distracted by gorgeous Lexi Mansfield. Josh can’t bring himself to use his best evasive maneuvers to escape her. With his thoughts on steamy nights and tangled sheets, he really doesn’t want to get out of her sights.

Or the satisfaction of being caught?

Following the tempting-looking stranger at her fundraiser starts out as a sexy game for Lexi. She’ll spend a few anonymous hours in his company and be free to move on. But she never imagines that when Josh turns his scorching gaze on her, the game rules change. Now Lexi is being pursued in the most tantalizing, skillful way…nd the stakes are for more than just a few hours of sexual pleasure.

“A wonderful fresh voice that is at times hilarious and then again very, very sexy…” — Reader to Reader

“Risky and exuberant…” — A Romance Review

…Josh Winger envisioned his pursuer climbing the stairs in her slinky black gown, and he ticked off enough time for her to reach the balcony he’d just vacated. Thinking she must be safely on the opposite side of the bar by now, Josh stepped from the dark hallway.

And nearly collided with a whirlwind of black sequins.

He obviously hadn’t given his pursuer enough credit, because there she stood with a satisfied gleam in her dark eyes. Her black hair shimmered in the low light of the bar. Although most of it rested on her head in an intricate knot, one wayward tendril curled around her neck and over her collarbone to point a path toward her cleavage. Cleavage outlined by a square neckline that exposed just enough pale skin to tease the hell out of him. The collar of diamonds around her throat was too sexy to even contemplate in a public place.

He instantly shifted his gaze to her face.

She arched a brow and smiled up at him. Even with her high heels, she barely reached his chin. “Excuse me. Guess I wasn’t watching where I was going.”

He couldn’t help but smile back at her. She practically preened with her small victory. “Seems to me you were right on target.”

She shrugged a careless shoulder and waved an airy hand, gestures which loosely conveyed consent to his words. Josh wondered if she always spoke so eloquently with her body. Her sequins danced and winked in her wake, giving her the illusion of perpetual motion.

“Maybe you’re right,” she admitted, giving him an obvious once-over with her eyes. “I just hope the reward proves to be as much fun as the chase.”

Name the place, honey. The temperature between them soared a few more degrees. The woman was a firecracker.

Josh’s smuggling investigation faded into the background for one perilous moment. His work seemed as distant as the zebra printed walls and the pulsing Latin music. This tiny woman had a bigger presence than salsa or smugglers.

But Josh wouldn’t allow himself to lose focus.

Before he could respond, the woman offered a cheeky grin and a formal handshake. “I’m Lexi Mansfield.”

Josh suspected it would be dangerous to touch her, but how could he ignore such an innocuous overture? Hesitating only briefly, he closed his fingers around Lexi’s long, jeweled fingers. “Josh Winger, at your service.”

She squeezed his hand back, her grip surprisingly strong for such a little thing. “I certainly hope so, Mr. Winger.”

Distracted by the wicked twinkle in her brown eyes and the exotic scent of her, Josh didn’t notice the handcuffs until cold metal clamped around his wrist. With a deft click of the mechanism worthy of a veteran vice cop, Josh’s stalker chained herself to him.

On the one night he needed to remain anonymous, Lexi Mansfield had just trapped him into a kinky handcuff scenario guaranteed to attract attention…