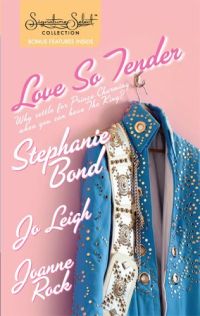 Why settle for Prince Charming when you can have The King? These three women can’t help falling in love…Vegas style!
In the charming rom com novella Good Luck Charm by Joanne Rock, stand-up comic Ellie Evans is determined to keep her relationship with comedy writer Charlie Webster strictly professional—in spite of the attraction. But just when Charlie’s about to check into the Heartbreak Hotel, he gets personal advice on how to make his moves…from The King himself!Also includes Taking Care of Business by Stephanie Bond and Play it Again, Elvis by Jo Leigh

If you’re looking for fun romantic stories to read on your lunch hour, LOVE SO TENDER is for you!

“A funny and offbeat salute to the King… all three novellas are ‘a hunka hunka burning love.’” — Romantic Times BOOK Club

Rule number one for successful séances— never allow yourself to get distracted by thoughts of a man. Especially if the man in question wasn’t the one you wanted to conjure.

Disappointed with another failed attempt to summon her icon— Elvis Aaron Presley, undisputed king of rock ‘n roll— Alyssa Renato blew out the candles on her makeshift séance table in the backroom of her Las Vegas memorabilia shop, The Good Luck Charm. Hot wax dribbled down the side of her white tapers, sealing her only good linen tablecloth to the round slab of cypress wood beneath.

Blast Brett Neale for foiling the latest “Meet the Presleys” séance and ruining perfectly good linen. She had no business thinking about him tonight when she needed answers only Elvis could provide.

“We’ll reach him next time,” a soft voice assured her from behind.

Turning, Alyssa found her séance medium packing up her black velvet invocation bag with a Ouija board and enough incense to cause smog in Vegas for the rest of the year. Laura “Stargazer” Grimaldi was five years younger than Alyssa’s thirty-two years, but she possessed enough personal dignity to carry off her medium role with class and style. No easy feat while wearing a crystal adorned turban.

“I hope so.” Alyssa scooped up a few scattered plates from the appetizers they’d eaten earlier, then followed her five guests through the backroom toward her storefront. “After tonight’s contact with Sonny Bono, I don’t know how many more dead singing celebrities we can possibly encounter. I loved Sonny & Cher as much as the next girl, but the heavens must be hard-up for singers willing to talk to us if he’s the best we can summon.”

They wound their way through the store, passing stacks of velvet paintings, a rack of vintage leather jackets and movie posters for everything from Love Me Tender to Viva Las Vegas. Alyssa surrounded herself with all kinds of music industry memorabilia, especially anything Elvis related. The King had been a family icon since she and her sister were apparently singing “Heartbreak Hotel” in a Tijuana orphanage when they’d been chosen by their adoptive parents. The Renato sisters had been taken in by great people, and although neither of the siblings had any real memory of the orphanage, they’d embraced Elvis as their personal patron saint.

They’d even carried that bond with their idol into adulthood. Alyssa had become a talent manager while Rosa, the younger sister by two years, had parlayed her love of music into a singing career. Together they went to number one on the pop charts, until a bout of anorexia nearly killed Rosa and forced Alyssa— who’d always felt light years older even though only twenty four months separated them— to call an abrupt end to her sister’s career.

“Oh come on, Alyssa. Sonny was as charming as ever. Much nicer than cranky Kurt Cobain who couldn’t be bothered to give us more than a grunt last time.” Laura lifted her velvet bag over the stacks of old LPs that had slowly infiltrated the aisles in the two years Alyssa had been running The Good Luck Charm. The quirky Vegas shop seemed a long way from the top of the Billboard charts, but at least it gave her a small connection to the music business she’d always loved.

A connection that sexy rock musician Brett Neale wanted her to re-open. Why couldn’t he understand that she could never go back into the industry that had nearly stolen her sister from her?

“You’re right,” she admitted, setting the snack plates beside the register until she said her goodbyes. “I’m just eager to conjure the right man.”

From a few feet ahead of them, a silky feminine voice shouted back. “Maybe next time we should play dress up in the store before we do the séance. We can all wear capes and sunglasses and see if that helps.”

The suggestion came from Alyssa’s ever-helpful sister, Rosa. Every one of the “Meet the Presleys” séance group members loved the King, but Rosa was the biggest zealot of them all.

In fact, Alyssa’s biggest reason for wanting to conjure the legendary singer was so she could ask him if they’d done the right thing to quit the music business. Alyssa had carried tons of guilt over the whole incident for the past two years, and by now their relationship was so strained they could barely carry on a real conversation without one of them losing their temper. But if Elvis agreed they’d made the right choice, surely Rosa would forgive her.

And, perhaps more to the point, maybe Alyssa would finally forgive herself.

“Nice try, sis, but you’re not getting your mitts on my new merchandise.” A red, floor-length cape had been specially made by a designer who had spelled out “Elvis Lives” in rhinestones on the back. The garment was pure poetry and had to be kept in a glass case— mostly to keep Rosa from stealing it when Alyssa wasn’t looking.

At least they had a relationship now. Things were slowly healing after the first year of mostly silent recovery from Rosa, but neither of them ever brought up the old days. Too painful. Too many unresolved hurts.

After making plans to meet again the following week, Alyssa unlocked the front door and said goodnight to her guests. Rosa blew her a kiss over her shoulder, her raven-dark hair streaked with skunky white highlights this week. She looked happy and had mentioned things might be getting serious with the new man in her life, but Alyssa could only think about the fact that her sister hadn’t eaten anything despite the wealth of snacks she’d served. Rosa might have gained weight since the incident that nearly cost her life, but she remained rail-thin. Couldn’t she have made an effort to munch a few carrot sticks? A scoop of warm Brie and apples?

Peering out at the street, she watched to make sure everyone made it safely to their cars and that Madame Stargazer managed her obscenely large bag of séance paraphernalia without incident. Alyssa was about to go back inside when a shadow caught her eye on the other side of the door she still held wide. Hurrying to shut the door just in case that shadow meant trouble, she paused when a man’s voice called her by name.

“Alyssa. It’s me.” The rich baritone edged in a smoky note halted her. Which was stupid, considering any brand of street thief or doped-up murderer could easily possess a beautiful voice. But before could scuttle back into the safety of the store, the man stepped into full view.

The very recent cause of her séance distraction.

Her breath caught for a moment, hitching in her throat as she took in his shaggy dark hair half covering one eye, but even that didn’t dim the mesmerizing blue of his gaze. Tall and lanky, he possessed muscles of the understated variety, the kind that didn’t draw your eye until they flexed right in front of you. They way Brett’s did now as he reached up to grab the door for her.

She took in his tattoo of Graceland on his right bicep. She’d noticed it before when they’d met in a music shop downtown six months ago when they’d both reached for a copy of Highway 61 Revisited, but she’d never seen the tattoo– or the muscle– up close and personal. Although he’d talked her into a date back then she’d realized pretty quickly over dinner she wasn’t ready to date a guy whose life remained tightly tied into the business she’d walked away from. Still, she’d never forgotten the electric attraction she’d felt for a guy who appreciated the classics.

“I need to talk to you.” His arm braced the door open, keeping him in her line of vision.

Not that she would have shut him out anyway. She hadn’t returned his last three phone calls, so she couldn’t really blame the guy for seeking her out in person.

“It’s a busy night here.” Or at least it had been up until this moment. She couldn’t be outright rude to him, but it couldn’t hurt to dole out a few excuses to avoid a conversation she didn’t want to have because now he wasn’t just looking for a date. His message hinted he wanted something she couldn’t possibly provide. “I really don’t have time.”

“Your séance crowd just left, right?” He turned back toward the street that was now almost empty since her guests had departed. The Strip glittered two streets over, the neon lights casting a residual glow that made the streetlamps in front of her store unnecessary. “I’ve been trying to reach you for over a week now. Maybe I can help you pick up and you can at least hear me out.”

Allow this delectable young musician inside her empty store lit only by a few candles burning? The idea struck her as unwise given that she’d been without a man in her life since forever. On an average day it didn’t bother her too much that she hadn’t taken a man to her bed in two years. But right now, staring at Graceland as it rippled in the dim light from a nearby streetlamp, Alyssa suddenly felt every moment of those sex-free years weighing on her. If Brett set foot in here now, she’d probably leave claw marks on that tasty young body of his…