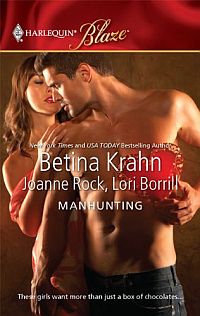 The Takedown by Joanne Rock

Luke Owens has been trying to avoid the sensual allure of Tori Halsey, his best friend’s little sister, all his life. But all bets are off when she decides to take him down and have her way with him!

Also includes The Chase by Betina Krahn and The Satisfaction by Lori Borrill.

The scantily clad female model glared at her two studly co-workers for the afternoon. The male models had just walked onto the set in photographer Tori Halsey’s home studio, their hips swathed in leather loin cloths that must serve as some art director’s idea of caveman regalia. Apparently the loin cloths weren’t working for the suede bikini-wearing leading lady though. With a pout, she turned to Tori and tossed her fiery red curls.

Thinking fast, Tori set aside her camera. She needed this one last shot before she could pack up for the day and forget about sex-drenched Valentine’s Day photos for at least a few months. As a freelance camera person for CrownCraft, the greeting card company, Tori knew Valentine’s Day notes were their industry’s biggest sellers next to Christmas cards, so Cupid’s holiday took up a large part of her work calendar.

Or exit, as it were. The redheaded model dodged lights and set props as she stormed toward her dressing room, leaving the two bare-chested studs behind.

“Angie, this shot will take us twenty minutes,” Tori called after her, wishing her job didn’t amount to sweet-talking temperamental talent so often. The Christmas shots were easier. She usually slated a skiing trip up north and snapped a few shots of snow-covered pine trees or cardinals alighting on window sills. Simple, easy stuff that didn’t require social skills and afforded her time to pursue the more artistic work she enjoyed. But the romancey Valentine’s Day pieces still paid the bills that gave her independence from her close-knit farm family in central Florida. “And I’ll let you bill it as an hour, okay?”

“That’s not the point!” Angie insisted, stomping her high heel for emphasis.

And how charming that the modern sexualized ideal of cave life involved suede bikinis and high heels.

“You’re uncomfortable with the m