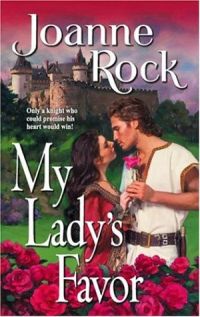 No man would own her…

Elysia Rougemont swore, though she knew the vow to be mere fancy for a noblewoman such as herself. Now although Fate had spared her one unwanted union, she found herself bound to Conon St. Simeon by virtue of his valor, his chivalry-and the secret stirrings of passion all-consuming!

Conon St. Simeon, knight of legendary prowess, would pledge his heart and soul and strong sword arm to Elysia, Countess of Vannes, an independent beauty cloaked in secrets-if she could accept a man with mysteries of his own. For she was a woman like no other…and he wanted no other but her!

“A sinfully sexy hero who knows what it is like to yearn for a measure of independence shows an all-work-and-no-play heroine how to enjoy life in Rock’s latest expertly crafted, delightfully entertaining medieval romance.” — Booklist

“Rock seems to have taken a little of A Knight’s Tale and mixed it with a medieval ballad to create a quick, light medieval romance that gives readers a glimpse into the era and a woman’s place in the 14th century.” — Romantic Times BOOK Club

The garden looks more promising than the groom. Elysia Rougemont stood outside Vannes Keep, admiring the profusion of plants in well-tended rows, hoping to distract herself from thoughts of her upcoming marriage. Thyme and rosemary stood shoulder to shoulder with more frivolous herbs like lavender and sweet marjoram.

Elysia had little use for lavender or marjoram.

The fragrant patch of earth signified the only redeeming feature Elysia could discern about Vannes, the monstrous chateau that would officially be her home by nightfall— when she would marry the ancient Count of Vannes, Jacques St. Simeon.

She peered back at the keep, a massive structure of stone that went far beyond a simple fortified manor house. Nay, her new home could only be called a fortress, built for war and defense with its abundance of gates and projected fighting galleries that dominated the walls. Her future husband had told her he was a man of peace, but his home did not seem to uphold his words.

Swiping a slipper clad foot through the warm earth, Elysia tried to concentrate on the pleasing quality of the fertile soil and not her aging sot of a future husband.

She could almost pretend she was back at her own keep in England. No matter that she and her mother had been subject to the will of their overlord since her father’s death, Elysia had enjoyed their way of life. She’d built a small but thriving linen trade with the help of her mother, a venture she took both pleasure and pride in, a way to distinguish herself in a world that held little appreciation for the feminine arts.

And although now Elysia’s wealth rivaled the most sought after heiresses on the continent, she could not touch a farthing of it. That right had belonged to her overlord and would soon pass to her husband.

If she hadn’t been forced to leave her linens to marry a greedy count of her overlord’s choosing, Elysia might have been home reviewing the progress of her flax fields instead of contemplating the uses of Vannes’ fanciful herbs.

Her wishful vision vanished at the sound of a deep masculine voice.

“Be of good cheer, my somber lady. You are quite fortunate the count is but two steps from the grave.”

Whirling around with a start, Elysia sought the source of the callous words. A fragrant gasp of air caught in her throat. Surely the speaker was not the golden vision of a man across the boxwood hedge.

“Excuse me?” Elysia managed, certain she must have misunderstood.

“With any luck, ch