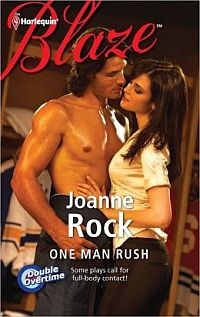 Matchmaking Case File #114
Requested Match: Kyle Murphy, pro hockey player. (This guy can score.)
Challenge: Not looking for anything serious (yet).
Notes: Ridiculously attractive, sexy, irresistible…and I want him for myself!

Matchmaker Marissa Collins is looking for a man. A hot, successful man. But the man she’s considering—hockey player Kyle Murphy—is for a prospective client. Marissa’s matchmaking professionalism goes MIA, though, when she meets Kyle…who’s not coming along quietly.

Kyle isn’t looking for a match. He has his eye on the prize—the Stanley Cup—or at least he did before Marissa dropped into his life. Now he’s playing a new game, one where getting Marissa in bed is the goal. And if he has to play dirty…that’s even better.

“Can I get a Diet Coke?” she asked the bartender as the women who’d been in front of her finally giggled their way back to the dance floor. The high octave girly laughter raked along Marissa’s already tense nerves, cranking up the ache behind her left eyeball. “Actually, could you add a Macallan single malt over ice to that order?”

She’d be stuck here for a couple of hours if she wanted to wait out the crowds. A little whiskey might take some of the meanness out of the headache, at least.

“I don’t know,” the bartender shot back with a deep bass, drawing her attention from the mob around the hockey players. “Can I see some I.D.?”

Frowning, Marissa knew she didn’t look remotely close to the minimum drinking age. If anything, she dressed like someone a couple of decades older than her twenty-seven years in an effort to keep herself out of the fray when it came to discussing dates. Still, she reached for her purse to retrieve her license, her gaze moving toward the guy behind the bar who was dressed incongruously in a crisp white tuxedo shirt and a baseball cap.

Forest green eyes glittered back at her in the icy fluorescent glow from a lamp on the bar. A crooked nose hovered above full, sculpted lips. Even with a Phantoms’ cap pulled low over his forehead, the shape of the bartender’s face remained familiar, perhaps because she’d studied it in a newspaper clipping so recently.

She’d wanted a one-on-one with power forward Kyle Murphy. Unfortunately, the sudden appearance of so much potent sex appeal robbed her of speech, thought and good sense.

Silence stretched while her heartbeat thundered.

As professional first impressions went, she couldn’t imagine making a worse one.

***
No words were necessary when sexual attraction spoke a language all its own.

Kyle Murphy enjoyed the moment as he assessed the reed thin female on the other side of the bar who’d been struck speechless ever since he’d asked for her I.D. The old-fashioned, cat’s eye, tortoise shell frames that perched on her nose were vintage 1960s. In fact, she looked like she could have stepped off the set of Mad Men with her throwback dress and the perfectly applied lipstick. Her dark hair was yanked back in an unforgiving twist rarely worn by young women.

Her style seemed purposely quirky. But if she intended to hide behind the glasses and the severe hairstyle, she’d failed miserably. Dressing twenty years older than she was didn’t disguise her subtle curves. If anything, the clothes accentuated her hips and her narrow waist. Sometimes the more a woman covered up, the more a guy noticed. Especially when the rest of the women in the room were dressed in spaghetti straps and short skirts. Besides this female had pretty features. High, arched brows topped off eyes so blue they were practically violet. A slightly upturned nose gave her a patrician look. Creamy, pale skin contrasted sharply with inky dark hair.

Sexy. Unusual. And the first woman who hadn’t ordered an appletini or a cosmo in the half hour he’d manned the bar.

She was the kind of woman that appealed to him — the kind who didn’t look like she was trying too hard — but he was done with casual hookups. First of all because it was too deep into hockey season when he needed to be focused on his game. He hadn’t been with anyone since last autumn when he’d convinced one of the nurses on an opponent’s medical staff to come home with him. Turned out she’d only been in the market to see how many pro-athlete conquests she could make and she’d been gone before dawn. So he planned to be more careful with dating when he got back around to it—after he took home the Stanley Cup this spring.

After a long deer in the headlights look, the woman at the bar finally spoke.

“I’m sorry.” She shook her head as if to clear it. “On second thought, I definitely don’t need the alcohol. Diet Coke will be fine.”

“I was only messing with you about the I.D.,” he confided, taking his time with the ice cubes so he could keep her there longer. Figure out what it was that drew his attention like a magnet. “Anyone who rakes in enough dough to warrant a plate at this party deserves a drink.”

He wasn’t the kind to flirt, so he didn’t understand why he found himself sliding closer than necessary to speak to her. Her whole bookworm vibe was an intriguing change from the women who threw themselves at him because of his job. But he had no business getting attached to anyone when he was on the road for most of the year and could be traded at any time. He’d been in Philly for less than a month after playing in Boston for most of the season. For all he knew, he could be on the roster in Edmonton this time next year. The Phantoms had wanted the scoring magic he offered in tandem with his foster brother, Axel Rankin. The two of them had been reunited on the ice at the start of the season when Kyle had started the year with Axel’s former team, the Boston Bears. They’d each posted record-breaking stats with the club, but had been picked up by the Phantoms at the trade deadline when the Bears showed no signs of making a playoff run.

“Anyone talented enough to make an NHL roster deserves to enjoy a team soiree rather than work the bar.”

“Shh.” He put a finger over his lips to keep the lid on the secret while he cracked open a soda from a nearby cooler. “Not many people have spotted me over here yet.”

“You like downplaying your role?” Her eyebrows knitted, as if she found that hard to believe.

“I prefer to let my stick handling do my talking.” He cut a fresh lemon and tossed a slice in the glass, still stalling and determined to make the most of this little moment. “I’m not much on the dog and pony show promo events, but this is different since it’s for a group of the Phantoms’ charities. Still, I’d rather offer up manpower behind the bar than sign hats or total strangers’breasts.”

He couldn’t imagine this woman digging under a t-shirt to offer up her wares at a public autographing event and that made him all the more interested in earning the privilege to see them privately.

A ghost of a smile played along her lips so quickly he wasn’t sure it had even been there. She leaned over the bar just enough to lower her voice.

“Aren’t you a little young for the thrill of strange breasts to have worn off already?” She eyeballed him above the rim of those librarian glasses and latent naughty teacher fantasies sprang to life.

“In my experience, the best things in life don’t come easy.” He topped off the soda she’d ordered, unable to stall any longer with a scowling, red-faced guy in a tux in line behind her. “I’d rather invest the time necessary to do my own undressing.”

She eased back, nodding her approval. “Very commendable. You are a welcome surprise, Mr. Murphy.”