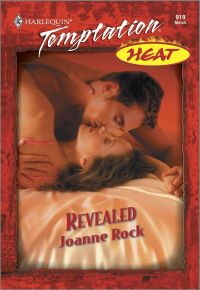 A bachelor party seems an unlikely place to find romance, until the best man runs off with the reluctant stripper…A performance he won’t forget!

When her costume ends up falling around her ankles in an impromptu striptease, Jackie Brady realizes she just sang to the wrong party. Somehow these bachelors weren’t expecting “Happy Birthday”-even if it was a rather revealing rendition. But the steamy look in gorgeous best man Greg De Costa’s eyes tells her he’s more than pleased she crashed the party. So what harm would there be in accepting bachelor number two’s seductive invitation?

Greg is spellbound by this sexy singer-even before she loses her costume! He definitely wants to know more about the sensual Jackie. But, through a not-so-funny twist of fate they’re working together and he’s vowed never to mix business with pleasure. Too bad the memory of her scorching kisses has him forgetting about his good intentions…

“Joanne Rock has quickly made a name for herself in the romance genre, writing books that sizzle and tell a great story… A sexy romp full of humor and wit, Revealed is just plain fun!” — Courtney Bowden, Romance Reviews Today

“This book sings loud and clear just how talented Joanne Rock is in bringing her readers delicious and delectable romances that heat you up and make you tingle all over.” — ReadertoReader.com

“Revealed, an unusual, decadent story, has a remarkably fun plot that includes intelligent, strong characters who’re uninhibited and not afraid to live life to the fullest…” — Old Book Barn Gazette

Jackie started to panic when her tail fell off for the third time. Thank God for duct tape or her fuzzy pants could have well been down around her ankles before she danced her way into the restaurant.

She finished her costume adjustments and smoothed her glued-on whiskers just as the elevator doors slid open. Careful not to tread on her ailing tail, she stepped into the penthouse level eatery of a downtown Boston brownstone. Now all she needed to do was locate the birthday boy, sing her telegram song, and then she could reclaim her Friday night as her own.

So what if her stint as a singing telegram wasn’t exactly rocket science? It paid more than her daytime work as a copywriter. Both jobs were only a means to an end anyway. She was prepared to abide a few sacrifices to achieve her dream of being a composing children’s music.

Besides, there was a certain nobility in any job that involved making people happy. A nobility that could scarcely be diminished by the kitty ears perched on her head.

The squeak of her tennis shoes on the polished wooden floor resounded throughout the dining area. Patrons paused between bites of mozzarella sticks and greasy chicken wings to note the cat woman strolling in their midst.

Not that Jackie cared.

But then, she’d been causing too much commotion all of her life. There was the time she decided to sing the elements of the periodic table for her science fair project. Sure she’d ruffled the feathers of all the kids who’d made robots, but she’d taken second place at the state competition. Then, just last week she’d gone out on a limb at a singing audition by transforming a rendition of a melodic herbal store jingle into a semi-tuneful Tarzan-inspired jungle cry.

Jackie was no stranger to turning heads. Or taking risks. Sometimes they paid off, like the science fair victory. Sometimes they landed her back on the pavement singing telegrams, as last week’s unsuccessful audition proved.

Still, she wondered how she’d gotten suckered into this last minute singing assignment when all she’d wanted to do tonight was recharge her creative batteries and develop some new song concepts. She’d had an idea rattling around in her brain— some rough lyrics for a new diet soda commercial she would polish and put on her demo tape. But the Zing-O-Gram office temp had sounded so desperate when she’d called, Jackie had no choice but to cover tonight’s late breaking gig.

Just her luck, she had to be the only Zing-O-Gram employee on call without a date lined up for a Friday night. Nothing new there. Sure she had plenty of offers. Heck, the cat get-up on its own could usually elicit a few dinner invitations in the course of an evening.

But never from the right sort of guys. Jackie wanted a man who knew how to have a good time— someone who cared more about following his heart and his dreams than the Almighty Buck. Boston was full of gorgeous men, but they all seemed to be on a relentless career fast track that Jackie refused to enter.

She would locate Gregory the birthday boy, sing him a cute song for his special day, and be on her way back to her solo Friday night. She’d be fine without a man in her life, and she’d be fine getting through tonight’s performance.

Assuming she didn’t burst a seam on this two sizes too small cat costume first.

Jackie took slow, shallow breaths to ensure the black fuzzy suit stayed in place. She could handle this as long as she kept her song in a manageable octave. Those high notes had been known to strain even the best of seams— she sure as heck wasn’t about to try shattering any glass outfitted in this feline shrink-wrap. She’d just keep the tune in a comfortable range and she’d have no problem staying in her garb.

She was singing a simple ditty at a birthday party for a six-year old boy. What could possibly go wrong?