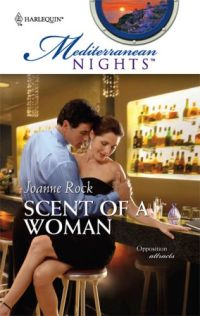 When it comes to one’s company, two’s a crowd…

Danielle Chevalier has a taste for the finer things in life, especially the lush, exotic scents she creates at her fragrance business. Under pressure from her brother to sell the small company, Danielle is thrilled when she’s invited to an exclusive conference aboard the cruise ship Alexandra’s Dream. There she hopes to gain the contacts necessary to rally her business and avoid the devastation of a takeover. But Danielle’s dreams have a harsh run-in with reality when she meets Adam Burns, a representative from a major U.S. competitor who is determined to outmaneuver her in negotiations.

Fighting off the advances of a competing fragrance company is hard enough, but resisting her attraction to Adam may prove the real battle… and mixing business with pleasure just may cost her both.

“A steamy tale with truly terrific characters. Adam is far from a stereotypical rich playboy and Danielle has a seldom-seen depth and maturity. Perfect for the beach, but it’s got a little something extra.” — Romantic Times, 4 stars

Other Books in the Series

Preview the first book in the series, From Russia, With Love.

“Can I get you a drink, miss?” A handsome young server in white livery held a notepad in his hand, his accent hinting at Russian descent.