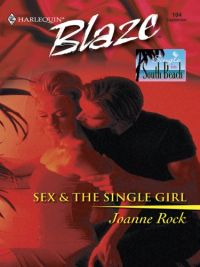 The single girl’s motto: Have your fun and leave…Brianne Wolcott is back in town as co-owner of the hottest singles resort to hit South Beach And her past is here greet her in the form of Aidan Maddock. A lifetime ago she had a schoolgirl crush on the sexy FBI agent. But she is so over him now…or is she? The way her pulse reacts when he’s around suggests that she still has a thing for Aidan. Well, fine. She’ll have her one night with him and that’s that. Too bad her libido insists that one night is not enough.

Unless you’re tempted to stay!

Aidan used up all his resistance to Brianne when he sent her away years ago. No surprise, then, that the sight of a very grown-up Brianne makes him forget all the reasons he refused…especially when she offers to act out the fantasies she’d once whispered in his ear. But she’s in for a surprise. Because once they hit the sheets, he’s not walking away…ever!

“With its believable characters, amazing backdrop, and sizzling love scenes, Joanne Rock’s Single in South Beach series is sure to shoot her to the top…” — Angela Camp, Romance Reviews Today

“Get ready for another unforgettable experience from one of the romance genres hottest stars…” — Diana Tidlund, Writers Unlimited

“Saucy, smart, and sexy — Joanne Rock’s Sex and the Single Girl rocks! A hero to die for, a classy heroine, and a romance that will leave you breathless.” — Romance Times

“This book sizzles with sexy characters in a sexy setting.” — About Romance Fiction

“Hold on to your panties, girlfriends. It’s raining men just outside our front door.” Brianne Wolcott eyed the monitor from security camera number three, the one with the best view of the crowd gathered at Club Paradise’s Ocean Drive entrance— and all the gorgeous guys waiting in line. The mob of people would be checking out the newly revamped disco in another hour. Nervous energy hummed through her. As a new part owner and head of security for the club, Brianne needed to make sure tonight’s reopening ran smoothly. “Looks like we’re in for a busy night.”

“My panties couldn’t be more firmly in place if they were Super Glued to my hips.” Lainie Reynolds, CEO of the reorganized South Beach resort and nightclub, slid into the oversize leather chair behind Brianne’s desk in the slick, modern office housing the club’s most high-tech equipment. “Divorce will do that to you.”

The four founding members of the soon-to-be hottest spot on Miami’s trendy South Beach had called a meeting an hour before they opened their doors for business. Although Club Paradise had been a wildly successful resort for couples over the last five years, the three former partners behind that business— known locally as the Rat Pack— had absconded with the profits. Brianne’s stepfather had been one of those partners, Lainie’s husband another.

With Lainie’s business savvy and legal guidance, the women left behind in the wake of the embezzlement scheme had pulled together to restructure the company. Tonight they were reopening just the club. In a few weeks, they’d have the rest of the resort refurbished and ready for guests. The couples theme was out, however. Given that three of the four women who now owned the business had been deceived by husbands or boyfriends in the Rat Pack, the new owners had no desire to market themselves for the sticky sweet couples’ demographic. Club Paradise would slowly be overhauled into a singles’ haven— a lush, hedonistic oasis for the uninhibited.

And although Brianne hadn’t been dumped by a husband or boyfriend in the Rat Pack— merely inconvenienced by her highly immoral stepfather— she’d still bought into the singles theme. She had a hideous track record in the dating world, and even worse experience as part of a couple. She couldn’t wait to enjoy the lavish, sensual luxuries the club would provide.

Summer Farnsworth, another founding partner and the ambiance coordinator for the club, approached the television screen teeming with men. She blew a kinky blonde curl out of her eyes and traced a finger over a muscle-bound motorcycle rider who had pulled in front of the line outside. “I don’t know, Lainie. Even Super Glue might not be strong enough to resist the temptations we are going to be subjecting ourselves to in this line of work. Have you seen these guys?”

Brianne suspected Summer would be the quickest to find romance— or at least some sensual diversion— during the course of their upcoming endeavor. Sort of a flower child throwback, Summer prided herself on lack of inhibitions and what she called “living in the moment.” While Brianne had never considered herself uptight, next to earthy Summer and her seductive wardrobe of silk skirts and halter tops, Brianne sometimes feared her tailored clothes and dark colors made her look downright repressed.

Not yet. She was more interested in keeping an eye out for a Mr. Wrong from her ancient past. Rumor had it FBI agent Aidan Maddock was nvestigating the scandal that had rocked the club last year, and he was the last man Brianne needed to see. Sure Aidan might have held more than a little appeal for her at one time, but the man held a grudge against her stepfather and had proved himself impervious to Brianne’s every seductive machination ten years ago. He’d be better off remaining in her past.

But Brianne wasn’t entirely comfortable with spilling her intimate thoughts to women she’d only known for all of a month. “I’ll be too busy doing my job.” Keeping an eye out for the agent she suspected would be watching Club Paradise very carefully. “Speaking of which, I’ve got some security concerns I’d like to share as soon as Giselle arrives—”

“Sorry I’m late.” On cue, the club’s head chef, Giselle Cesare, burst through the office door. A petite, dark-haired Italian, Giselle was a non-stop bundle of energy. She balanced a tray of exotic drinks topped with fortune cookies in one hand. “I thought the start of our new venture deserved a toast.” She lowered the tray of drinks onto the desk with a flourish. “Introducing the Good Fortune Potion, newest specialty of the house.”

While Summer squealed, Brianne hurried to stuff a glass in Lainie’s hand. Lainie was having a difficult time getting over the fact that her husband had not only embezzled half her money, he’d also indulged in a quick affair with Giselle before he’d skipped town. What Lainie didn’t seem to understand was that the bastard had hurt Giselle nearly as much in the process, providing her with more guilt than a guileless twenty-five year old deserved. Giselle had no idea that the man had been married.

But even Lainie seemed to catch the momentary spirit of camaraderie and she sipped at her drink too.

“This is awesome.” Brianne raised her glass to the chef and temporary bartender. “But before we toast the grand opening, I wanted to suggest we open our doors a little earlier than we anticipated to try and minimize the crowds out front. There are already journalists swarming and I don’t want our guests getting hassled about the club’s old scandals.” Nor did she want to miss her stepfather’s nemesis, agent Aidan Maddock, if he tried to get in the disco tonight.

Lainie and Summer were both shaking their heads before she finished. Lainie set her fortune cookie on a cocktail napkin atop Brianne’s shiny lacquered desk. “We want the press, Bri, even if it’s negative,” she argued. “And we definitely don’t want to lose the long line out front as that’s one of the main elements of cachet for a hot spot.”

“Not to mention the moon is void of course until almost eleven tonight,” Summer added, clutching one of her crystal necklaces as if for good luck. “We agreed to open at eleven because by then the moon will be entering Aries and the stars will be in a favorable position for the new venture.”

Brianne focused very hard on her fortune cookie to prevent herself from rolling her eyes. “But it’s difficult for the surveillance cameras to detect images with the bright lights of the television crew glaring into their lenses. I’d hate to have a security breach our first night because we failed to take a few simple precautions.”

Brianne recognized the importance of security measures. Her last relationship before she’d left New York had been with a guy who couldn’t seem to take no for an answer. If not for her techno-gizmos and stepped up security measures, she might have actually been concerned for her personal safety. Did it hurt to be a little careful?

“Send some of the Kama Sutra cookies,” Summer urged, “those pretzel positions ought to keep the crew intrigued for at least another hour.”

Lainie shook her head. “I wouldn’t want to waste her most delicate work on the media.” She sniffed in distaste at the word. But then, all of the members of Club Paradise’s new ownership had been scrutinized in the news over the last few weeks. “I think most of the reporters are male, so I bet a box of the doughnuts with cherry nipples ought to be distraction enough. Good thinking.”

Brianne exchanged surprised glances with Summer. The compliment was the most civil exchange Giselle and Lainie had managed all month.

“Is that okay with you, Bri?” Lainie asked.

“It ought to work. Heaven knows I wouldn’t want to disrupt our moon timing.”

“We all want tonight to be a success, don’t we?“ Summer asked, unoffended. “A little help from a favorable celestial alignment couldn’t hurt.”

“Neither could a toast,” Brianne agreed, lifting her Good Fortune Potion high in the air. “To the success of Club Paradise.”

“To a feast for the senses,” added Giselle, clinking her glass in time with her words. Lainie rose to her feet. “To a fat bottom line and sweet, financial revenge.”

Summer sidled over to the group. “And for crying out loud, girlfriends, let’s have a little fun while we’re at it. May we all enjoy the single life at its absolute, delicious best.”

Their collective clank of glasses sent Good Fortune Potion spilling down their arms and to the floor as they christened their partnership and began a friendship.