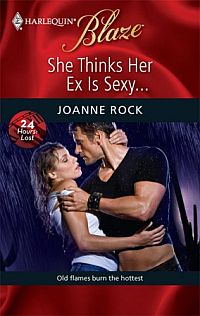 Shannon Leigh didn’t look back when her rock-star lover split. Even though they had the most heartstopping sex imaginable, Romero Jinks just wasn’t the one for her.But then she and her ex are thrown together for a friend’s wedding—in sensual Mexico. Shannon forces herself to resist Romero’s megawatt sex appeal until they leave… Only to get stranded in the middle of the desert!Now she’s confronted by Romero’s gloriously shirtless state. Before long, she’s screaming in pure bliss under the hot sky. It’s a scorcher of a reunion. Yet Shannon’s determined they’ll go their separate ways once they’re rescued. Because someone so wrong for her can’t possibly be right…right?

What a difference a day makes!

“Every single person in this hotel is getting it on right now except me.” Shannon Leigh cradled her cell phone against one shoulder as she packed her suitcase in an exclusive Mexican seaside resort, her emotions in more disarray than her stale career. “It’s like the Cupid wedding theme ran wild and infected every employee and guest in the place. I just went to hunt down more towels and even the maid is getting busy in the supply closet.”

“Eeeww.” Shannon’s agent, Ceily, was back home in L.A. She started her day at six a.m. so Shannon hadn’t felt terribly guilty about waking her at five to share the trauma of this Valentine weekend wedding from hell.

Shannon’s best friend had gotten married in a romantic private ceremony in La Paz on the Baja Peninsula and Shannon was the maid of honor. Too bad she’d agreed to the Cupid fest before the best man—her rock star boyfriend of almost a year— had broken up with her. She’d been stuck watching him charm his way through the wedding with adoring female guests throwing themselves at his feet wherever he went. She’d been due to jet out the night before until her charter flight had to cancel for engine trouble. A situation Romero overheard during the wedding reception and publicly offered to drive her back to L.A. the following morning.

How could she refuse gracefully without drawing more attention to a break up that still had the tabloids buzzing three months after the fact?

Shannon had no idea how she’d survive the long trip ensconced in a small sports car with one of the sexiest men in the known universe. And that wasn’t just her opinion. Look up any VH1 poll on hot rockers and Romero Jinks topped the charts. She just wanted to get the hell out of the love-fest hotel and back to real life. Back to salvaging her imperiled career.

“Tell me about it. I was trying diligently to avoid any more romance references after the overexposure to pink roses, pink champagne and pink bridesmaid dresses. Then I have to stumble into a storage room orgy.” She yanked the lemon yellow dress she’d worn to the rehearsal dinner from the closet and tossed it onto the bed, trying not to think about how long it had been since she’d had sex. Three months without Romero had been— lonely. But even before that there’d been the fights and the nights alone in his king size bed while he made love to his damn guitar instead of her.

Their relationship had been deteriorating for months from lack of communication and-often-lack of presence on the same continent. She needed to talk and connect with him while he had long stretches of brooding alone time that fueled his music and left her frustrated. The whole precarious situation had imploded over the stupidest fight ever when he’d bought new hiking boots for his entire entourage but hadn’t bothered to toss a pair in her direction.

She’d been petty to erupt about something so superficial, but it wasn’t about the damn boots. She’d been tired of being a non-entity to him while he’d meant so much to her.

“You should totally report her and I don’t want you using those towels.” Ceily’s voice cracked, no doubt because she hadn’t had her morning coffee or her first cigarette of the day which, bizarrely, seemed to clear her throat.

Shannon’s high heeled slipper caught in the strap of her sequined bag and she tripped, twisting her ankle. And shouldn’t she know better than to march around the room in a snit? How many times had she cringed as a kid when her movie star mother threw tantrums?

“Damn it!” She cursed the satin and rhinestone slippers and kicked them both off, sending them sliding along the terrazzo floor covered with Navajo rugs. “I can’t report her because I didn’t actually catch her boinking the night manager. I just saw her blouse all wrinkled and her hair undone while he pretended to look around a ten by ten storage room for his clipboard.”

She threw the sequined bag into her vintage canvas luggage and rubbed her ankle, not giving Ceily time to comment before another thought occurred to her.

“Come to think of it, their act to cover up what they’d been doing was so good, you should be sending them on casting calls instead of me.” Her ankle throbbed, but not nearly as much as her heart aching at the thought of her career in a downward spiral along with her romantic life.

She’d received no serious offers for roles after her last part in a “B” thriller, a sure sign she was closing in on the end of her marginal profession as an actress. She had a back-up plan to move to New York and try theater, but that hadn’t been her dream when she’d watched her movie star mother throw away her own career to drug addiction and bad choices.

Shannon had always thought she’d be able to mold a stronger, healthier path through Tinseltown than her mom, but after almost fifteen years of effort, she hadn’t even come close to her Bridget Leigh’s fame. Still, she wouldn’t be so blue about any of it if the career news hadn’t come so hot on the heels of her break up. And this weekend sure did rub Shannon’s nose in all of her failures. Her best friend had made her trip down the aisle the day before even though Shannon had spent twice as long in a committed relationship as Amy. While she was happy for her bud, an actress who’d given up her career to be with her multi-millionaire restaurateur, she couldn’t see herself sacrificing her dreams of acting for the sake of her relationship.

Shannon’s eleven and a half month stint with Romero had gone up in flames three months ago and it still hurt to think about what they’d thrown away. She had to close the French doors overlooking the ocean to drown out the chorus of orgasmic sighs drifting on the breeze.

Shutting the door didn’t shut down the conviction one of the orgasmic sighs came from the woman her guitar playing ex-boyfriend had danced with three times at the reception.

“Shannon, I will find you a great part,” Ceily assured her. “You’re good at what you do and you’re a professional. You know as well as I do how rare that is in this business.”

“Rare like women over thirty?” Rising from the bed, she stuffed her pink bridesmaid dress into her suitcase, remembering how fantastic Romero had looked in his tuxedo on the beach the day before.

“Honey, tell that to Drew Barrymore.”

“A glittering exception to the rule.” Shannon grumbled, in no mood to be placated when her life in Hollywood was very possibly over. Why did Romero have to prod their limping relationship into gasping heart failure right when the rest of her world was coming apart? Especially since she’d been so careful to shield his artistically sensitive self from her problems so as not to disrupt his all important song writing. “Although I have no business dragging all my problems to your doorstep. I just wanted to tell you not to worry about the dogs today. I’ll be home in time to feed Abbott and Costello tonight.”

Assuming, of course, she made it back to L.A. and her two Pekingese-Chihuahua mix pets without succumbing to the temptation to drag Romero off to a Mexican hideaway and remind him exactly how good they’d been together. A juvenile move that would feel great in the short run and only hurt more tomorrow. She’d made it three months without him, hadn’t she? She moved back to the closet and promptly stumbled on the slippers she’d tossed moments before. One pedicured toenail banged against a satin buckle on the discarded shoe and broke, tearing halfway across the nail bed. Pitching both slippers into the suitcase where she should have put them in the first place, she hopped on one foot toward her purse to find a bandage.

“Shanny, you don’t need to apologize.” Ceily’s voice went maternal and soft, reminding Shannon of how many ways this woman had filled a void in her life after her superstar mother had overdosed. Shannon had been celebrating her fourteenth birthday with friends when her mom had taken too many sleeping pills. She’d never figured out if it had been intentional or not, but even after all the fights with her mother, Shannon had missed her mother’s moments of clarity. When Bridget Leigh wasn’t drugged up or foisting her own insecurities onto Shannon, she was one of those bright light personalities that outshone anyone else in the room.

She was clearing an unexpected lump from her throat when Ceily spoke again.

“Honey, since you’ve got that long ride home with your ex today, I wondered if you would ask him to call me? I met a producer who knows that I rep you and he asked me about the possibility of getting Romero to play himself in a docudrama about his old band, Jinxed.”

Shannon dropped the bandage she’d found, the white wrapper slipping back into the uncharted depths of a purse filled with everything from her Blackberry to a twelve-piece makeup brush set. Shannon’s current career choices consisted of a sleazy independent film about her actress mother’s life or a role on the small-time theater circuit off Broadway, yet her Romero didn’t even need to pursue acting to find film roles.

“You want me to ask him?” Shannon couldn’t help a quick mental image of herself pouring a pound of salt in the gaping wound of her chest. And yeah, a bit of her ego smarted here too. “Our careers became a bit of a sore subject for us, Ceily.”

Or maybe, that’s just how she felt every time he touched her. She’d felt fortunate. Fantastic. Priceless.