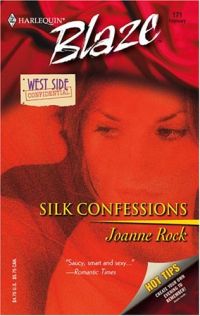 He’s armed, she’s dangerous…As a hot-shot detective, Wes Shaw thinks he’s seen it all— until he meets luscious Tempest Boucher. She’s a blend of artistic sensuality and no-nonsense practicality that he can’t resist. Too bad he suspects one of her companies as being a front for an illegal sex ring…and possibly murder. Now he has to wonder if his pursuit of her is for the sake of the case or for something very personal.

Tempest has always lived by the rules. So to find herself the subject of an intense investigation by one sexy cop has sparked all kinds of rebellious impulses in her. Soon, his interrogations lead to intimate confessions across the sheets…and even hotter explorations!

“When Joanne Rock brings you into her highly charged world, there’s no way to escape without feeling the heat. Her characters sizzle from page one straight through to the ending.;” — Romance Junkies

“Fast-paced and intriguing…;” — A Romance Review

“…Plot twists that will astound and please any reader who enjoys the unexpected.;” — Fallen Angels Reviews

“Preferences— threesomes, foursomes and more.” Tempest read aloud one of the entries in the provocative profiles designed to generate plenty of interest for people looking for a date. She sounded vaguely scandalized, but that didn’t stop her for reaching for the mouse once again. “Do you think she’ll just pick one guy or will she choose four and ask them all to meet her at once?”

“Wait.” Wes restrained her wrist, unable to sit still while she stretched her delectable body in front of him for the third time. “I’ll get it.”

She froze there, body unmoving, her pulse pounding beneath the slight pressure of his thumb. “I just wanted to see what came up when you clicked on the hyperlink for threesomes. I guess I didn’t realize people were so… specific about what they wanted in a partner.”

“But if we start following all the options that catch our attention we’ll be here all night.” He held her wrist, held her gaze, hoping all the while she’d comprehend his real meaning.

It would have required a supreme act of willpower not to skim his thumb over the silky skin at the inside of her wrist. And after wrestling his growing attraction to Tempest over the last few hours, Wes found he no longer possessed the restraint. He traced a line down the delicate tendons there, absorbing the smooth perfection of her.

Her lips parted, her faded lipstick revealing the natural color of her soft pink mouth beneath. Hypnotized by the perfect shape the lush Cupid’s bow, Wes hovered closer until Tempest pulled away.

“Then I guess we’d better keep our attention more strictly focused.” Freeing her wrist, she reached for her water bottle and unscrewed the top. “I’ll check out the threesomes later.”

Wes wanted to redirect his thoughts but couldn’t seem to force himself to turn back to the computer. Lust still surged through him like the Eighth Avenue Express and she just shrugged it aside, like it was all in a day’s work for a pampered, privileged heiress. Did she get off on making men drool and then leaving them wanting?

He didn’t know what games this woman was playing, but he damn well wouldn’t be leaving her apartment until he found out.

****
As she stared back into the stormiest gray eyes she’d ever seen, Tempest decided Wes looked angry. No, more like quietly seething.

Well— newsflash— she wasn’t exactly thrilled to have him waltz in here and take over her home, her computer and her hormones either.

“Seems to me you’ve made concentration impossible.” Wes shoved aside their popcorn bowls before taking her water bottle from her hand, carefully screwing on the top, and pushed that away too. “Has it ever occurred to you all that stretching and reaching over me combined with your infernal fascination with threesomes just might distract a man?”

“I am not fascinated by—” How dare he? Of all the presumptuous, arrogant things to insinuate. “Are you accusing me of flirting with you?”

“What would you call it?” He didn’t raise his voice, instead keeping his tone very, very soft. “I’m not opposed to starting something between us if the appropriate time arises after I close my case. But I’ll be damned if I’ll let you get away with a lot of suggestive talk and sidling up close only to have you leave me high and dry and completely incapable of getting any work done.”

“You think I’m playing the tease?” And didn’t that just beat all? “I was nice enough to make you popcorn and I didn’t even say a word when you took over my computer keys like you own them, even though I’m more familiar with my computer and this Website than you are. Can I help it if I’m a little impatient to get through our work for the night so I can clean up the rest of the apartment and get back to my life?”

“But not impatient enough to point out the threesomes link?” He eased back ever so slightly, his self-assured body language somehow conveying a smugness that he’d made his point.

“So sue me for a prurient streak.” She had so not been flirting with him.

Forcing herself to consider the notion, she wondered if her sexual impulses could conspire to act without her explicit permission? What if her artistic persona and businesswoman fa