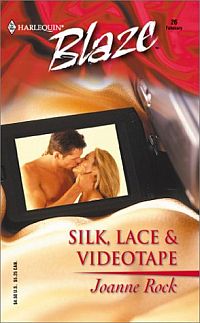 She didn’t mean to give him a private show…Window dresser Amanda Matthews never imagined she’d be so bold as to videotape herself doing a striptease to turn on her too-honorable beau. It seemed like the only way to initiate the wild affair she longs for— until the steamy video falls into the wrong man’s hands.

He promised not to tell…

New York detective Duke Rawlins thought he’d seen it all until Amanda Matthews blazes across his television screen in little more than a garter belt. Although Amanda swears she had no idea her boyfriend was a white collar criminal, Duke is certain this uptown girl is hiding more than a penchant for naughty lingerie. He’s determined to stay close to her until he uncovers all her secrets.

“A dynamic, scintillating tale of romance and chemistry…” — WordWeaving

…Maybe if Duke had been a better man, he would have fast-forwarded over Amanda’s seductive show. His finger wavered over the forward button, urging him to do the honorable thing.

But just then Amanda turned her back to the camera and reached for the zipper on the back of her gown.

Duke dropped the remote on the coffee table, gladly trading his eligibility for sainthood to watch that zipper slide south.

Inch by tantalizing inch, her skin revealed itself to his avid stare. His eyes tracked her gloved fingers’ progress as she slowly tugged the zipper. Finally, after he’d held his breath for as long as he possibly could, the expanse of creamy white flesh gave way to the shimmering satin of a hot pink merry widow.

Any lethargy he’d felt earlier this morning vanished. Staring at Amanda Matthews made every inch of his body leap to complete, intense alert. Restless tension thrummed through him as she paused her seductive unveiling. The artless way she looked at the camera almost made him think she’d just gotten her zipper stuck. Then out of the blue, her dress gave way beneath her fingers and fell to the runway floor in a pile of rich black velvet…