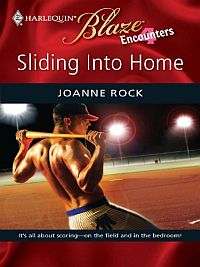 They play the field…but can they play for keeps?

Rookie Brody Davis has all the right moves. But will they be enough to tempt sexy Naomi back into his bed?

Shortstop hero Lance Montero must prove to a bad-girl heiress that he’s good at everything he does. Very, very good…

Superstar Javier Velasquez is getting a hot ’n heavy workout with Lisa, the team’s trainer. But who’s healing whom?

First baseman Rick Warren is on a winning streak…with the owner’s daughter!

“Have you been watching the news?”

Feeling like a suspect caught in the act because of her friend’s question, Naomi Benoit clutched the telephone receiver tighter in one hand as she muted the volume on the television with the other.

“Not since the six o’clock update,” she lied, forcing her restless feet into her cottage’s small kitchen to make a cup of tea. A wicked rainstorm battered the northeast tonight, seemingly centered on Naomi’s coastal New Hampshire hometown. Some tea would help ward off the storm’s chill and-maybe-help chase off the stupid, misplaced worries tonight’s news had stirred up. “And actually, I’ve got a ton of papers to grade before school tomorrow—”

“Do you believe Brody told the ump to— ah— screw off?”

Naomi’s friend Shayla had been her best bud since Naomi punched Mugsy Simpson on the playground for lifting Shayla’s skirt on a dare. Surely they’d been friends long enough for Shayla to know better than to bring up him?

The only ex-boyfriend to ever drag a piece of Naomi’s heart along with him when he left. The controversial baseball star Brody Davis. “Of course he told the ump to go scratch himself.” Naomi pulled a shiny red teapot from the cupboard and switched on the burner under her kettle. “Did you see that pitch he called strike three?”

Not that it was any of her concern. How pathetic was it that she would defend a guy who ended their relationship via phone from a hotel phone while he’d been on the road for a game? He’d never apologized. Never explained. He just got swept up into triple A baseball and then the majors and then endorsements for Nike. All of which apparently ranked higher than his hometown girlfriend on his personal radar.

Still, her gaze strayed to ESPN’s replay of today’s home plate shouting matching match in spite of herself.

“It looked low to me.” Shayla sighed on the other end of the phone. “But why can’t he ever walk away? Doesn’t he realize they’ll never renew his contract, let alone consider him for the Gold Glove he deserves? I keep thinking Brody will get past the big outbursts one of these days but—”

“Did I mention I had papers to grade?” Naomi’s heart shouldn’t twist over a conversation about an afternoon Boston Aces game at the home field just two hours south of them. She and Shay had been fans of the team since the sixth grade when Boston traded some upstart pitching prospect for Lyle Daringer, the hottest slugger on the planet at that time. But with Brody a fixture on the Aces’ roster this year, Naomi found she couldn’t dish about the games quite as much as in the old days.

Although, in her defense, she’d dated with a vengeance after the breakup to oust Brody from her heart. She thought she’d done a damn good job of it too, until her most recent ex-boyfriend suggested she was only interested in baseball because she carried a torch for her first love.

“Can you hear the subtle nuances of my cold silence on this end of the phone?” Shayla asked, remaining quiet for all of two seconds to illustrate her point.

“Who am I going to talk baseball with if you find something else to do every time Brody’s name comes up?”

Naomi’s cat, Zora, twined around her legs and meowed, recognizing Naomi’s proximity to the cat treat cabinet. She pulled out the container like any well-trained pet owner and sprinkled a snack in Zora’s bowl.

“As for the merits of Brody’s argument with the ump, you can hear Mike and Tony battle it out on Pardon the Interruption if you want some insights. At least they won’t write off his beef the way that snarky DJ on Big Apple Sports Radio will. Because while Brody might be the type to dump his girlfriend in the most tacky manner possible, he sure as heck wouldn’t argue a strike call without damn good reason.” She could respect the guy’s prowess on the diamond without carrying a freaking torch for him.

And frankly, as a diehard Aces fan, Naomi hated the flap Brody’s antics had caused in baseball circles, taking focus off the game and putting it on his… colorful character. She didn’t know what was up with him, but he was having a hell of a rookie year. The stats were amazing, but he seemed to touch off controversy at every other game.

“One last question,” Shayla pushed, stretching Naomi’s patience as the kettle began to whistle. “Do you think they’ll try to trade him for this?”

The hiss of steam blared through the kitchen, almost drowning out the roll of pounding thunder. Naomi tugged her sweater tighter around her and lifted the pot. As the whistling ceased, she realized the pounding wasn’t thunder.

It was a knock at her door.

“Someone’s here. I’ll see you in school tomorrow, okay?” Setting down the phone and the kettle, she hurried to the front door, wondering who would brave the storm. Zora kept pace, planting her furry cat body wherever she was about to step, nearly tripping her twice before she reached the door. She pulled it open to see the same face that had filled her TV screen in highlight reels ever since the one o’clock game in Boston.

****
“Ten minutes.” Brody figured he’d better start small in his requests if he wanted to gain admittance to Naomi’s house after a year of silence. A year of knowing he’d thrown away the best shot he’d ever had at real happiness. “That’s all I’m asking. Can I talk to you for ten minutes?”

Frowning, she studied him while the wind whipped his baseball jacket, the gusts driving a pelting rain on his back. She held the door open wide enough that the elements blew around the magazines and papers on a coffee table just behind her, but she seemed oblivious to the tempest. She appeared more concerned with how to tell him off while he came to her— a wet hat literally in hand— to talk.

“C’mon, Naomi,” he urged, miserable from the inside out. “I already struck out once tonight. You can’t ring me up a second time.”

Just remembering the fight with the ump and the ensuing dress down from his manager torqued him off all over again. But the mention of his latest outburst drew a lopsided grin from his former girlfriend.

Damn, but she was hot. Not manicured, groomed perfection. But real-woman sexy. Her fiery red hair and take-no-crap attitude had turned his head at a young age and set the standard for what he would find appealing in a woman for the rest of his life. Still, though they’d dated on and off in high school, they hadn’t really gotten serious until last year when he’d been on a farm team close to town.

“I can pretty much guarantee you won’t be scoring in this house, Slugger,” she drawled, standing aside to let him enter. “But I’ve got ten minutes if you’d like to dry off before I send you back down the highway to Boston in that jaunty little sports car.”

She could pick on his ride all she wanted. She didn’t know he’d already scored a victory tonight. Just stepping into Naomi Benoit’s house was like coming home.