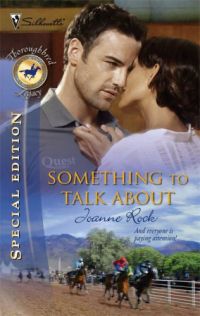 Goodbye California. Hello… Kentucky?Widowed single mom Amanda Emory wants a fresh start—far away from Los Angeles and her troubling past. All she wants out of her new job is a secure income and a safe haven for her kids. But her matchmaking nine-year-old has other ideas…

Horse trainer Robbie Preston has never shied away from risks. And the sparks between Robbie and Amanda are definitely dangerous. Yet her past—and his reputation—stand between them. It will take some serious courting to change Amanda’s mind, but Robbie is up for the challenge…even if it does give everyone something to talk about!

Thoroughbred Legacy — The purse is set and the stakes are high…

“An appealing combination of sweet and sexy…” — Romantic Times, 4 stars

Her voice surprised him now, even when he’d been expecting her.

He turned to find a far more sophisticated woman than he remembered. Her pretty dark hair and eyes were the same, but the outfit she wore… Damn it, he had no business taking in the soft curves of her slender frame, but the simple strapless blue cocktail dress she wore seemed to demand it. She’d thrown a yellow lace shawl around her shoulders, but it didn’t hide much of anything. Another hint of lace peeked out below the dress’s knee-length hem, accentuating her legs and drawing his gaze much too low.

“Sorry to take you away from the group.” He launched into conversation to recover from the awkward moment. “I won’t keep you.”

He waited for her to run away from him, like that day by the practice yard, or to come up with some excuse why she couldn’t speak to him, since she seemed to have been influenced by popular opinion regarding his character. Instead, she smiled warmly the way he remembered from the first time he’d seen her.

He wondered if his eyes widened as much as it felt like they did.

Probably yes since she laughed.

“I mean it. And I’m sorry if I seemed short with you the day we met, but it’s stressful starting a new job and I worried about taking time away to oversee Kiefer.”

She smelled delicious— like flowers and maybe vanilla. He wanted to lean in for a more definitive sniff.

“He’s a great kid.” He wanted to make it clear that he didn’t mind Kiefer’s presence around the stables.

And he definitely wanted to remember why he was here since it didn’t have anything to do with ogling a woman he had no business pursuing.

“Thank you.” She smiled with maternal pleasure and managed to look even more beautiful than she had two minutes ago. “I am very proud of both my boys but sometimes it’s hard to step back from the day in and day out worries over parenting to appreciate how really great they are. I’m fortunate.”

“You have two sons?” Robbie knew Kiefer hadn’t mentioned a brother, but the boy had been fairly wrapped up in learning about horses all week.

“Max is six and Kiefer is nine. And actually, I’ve been meaning to seek you out to thank you for the time you’ve spent with Kiefer this week. He feels more sure of himself at school now that he can talk about horses without sounding like a total outsider.”

“That’s why I’m here.” Robbie lowered his voice as one of the house maids hurried through the foyer with a vase of flowers. No doubt they were trying to get the dining room prepped for the meal. The laughter of the cocktail crowd drifted through the halls.

“He’s starting to get underfoot? I can—”

“No. Nothing like that.” He put a hand on top of her fluttering one, a reflex reaction to her bout of worries that suddenly drop-kicked him in the libido. The feel of her soft skin under his palm scent of surge of heat clean through him, the sudden awareness a palpable thing between them.

She stilled, frozen, her hand in mid air beneath his. He would have moved away faster if he could have sent the proper set of messages along his neurons, but his body didn’t seem to obey. He stood there for a long moment, absorbing the silken texture of her and breathing her scent.

She recovered first, snatching her hand away quickly even if her reaction had been delayed.

“Then what is it?” Her words were a little breathless, or was that just wishful thinking on his part?

“Kiefer wants to learn how to ride.” He was grateful for the words once he got them past his lips since they gave him something new to think about.

“I know he does, but honestly, I can’t afford—”

“Amanda, you haven’t gotten to know the Prestons well enough yet if you think we would want you to pay for lessons somewhere when you work at the biggest horse training facility in the commonwealth.”

“Really, I couldn’t ask for any special favors.” Her words were firm, her posture perfectly straight. She had “good girl” written on her so clearly he couldn’t help but smile.

Although he didn’t find her ethics half so amusing as he found his attraction to someone so sweetly upstanding. His track record with women ran more to the hell raising variety, but there was no denying his physical response to Amanda.

“It’s not a special favor.” He gestured to the house behind her. “You’re already standing in my mother’s foyer, having cocktails with the neighbors. Trust me when I tell you, we want you to feel like family here.” He may not have agreed with all of the family decisions, but Robbie had always liked that about Quest. The corporate culture was decidedly down home here. “And I just wanted your blessing that Kiefer has permission to ride before I let him on a horse. But I hope you’d never consider outsourcing riding lessons when you live here of all places. We tend to know our horses around Quest Stables.”

She grinned. “I guess you have a point there.”

“As long as you don’t mind, I can send Kiefer back to school with enough horse knowledge to set the other kids back a few steps.” His knowledge might not impress the old man, but it could knock the socks off the fourth graders.

“That would be really generous of you.” She pulled the thin lace shawl tighter around her shoulders, her fists clenching the fabric hard as if she could ward off the attraction zinging around the room. “But if he gets to be any trouble, I hope you’ll let me know.”

“I can do that. Although the traditional way to straighten out any troublemaking in a stable is to present the offender with a pitchfork and a stable for mucking.”

“I see you know kids better than I realized.”

“I’ve had a bit of a history with trouble making myself.”

“And your days with a pitchfork successfully reformed you?”

“I’m going to have to plead the Fifth on that one.”

Behind Amanda, the voices from the veranda grew louder as two men disputed the racing odds at an upcoming meet. A door slammed and the violin stopped playing.

“They must be coming in for dinner.” Amanda turned, toward the sound before glancing back at him. “I’m not staying for the meal, but I should go in and make my goodbyes before they sit down.”

He nodded, not wanting to cross paths with his family yet.

“Fine. I’ll wait for you and walk you to your car.” He didn’t know why he offered.

No, he knew why he offered, he wished he had a little more restraint since she was clearly reluctant where he was concerned.

“That’s not necessary. Thank you for the offer of lessons for Kiefer.” She stepped away, clearly eager to please his parents and play the proper guest.

“Not a problem.” He smiled genially, but stood his ground and waited for her return.

She might think they had settled matters between them now that they’d agreed on Kiefer riding. But in Robbie’s mind, they’d only succeeded in uncovering a bigger issue between them. And like any pink elephant in a room, the attraction between them wouldn’t go away just because they ignored it…