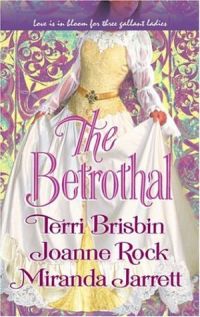 In THE CLAIMING OF LADY JOANNA by Terri Brisbin, Lady Joanna of Blackburn flees from her approaching marriage when she realizes that her future husband is the dark lord of Wynwydd, a sinister magician who will take her soul if he marries her. Lord Braden needs a bride, badly, for many reasons and cannot allow Joanna to slip from his grasp. He follows her across England and they end up in Silloth-on-Solway, where the interference of the local lord and lady turn his claiming into the wooing he never meant it to be. Will love be enough to save the lord of Wynwydd from the darkness surrounding him?

In A WEDDING IN THREE ACTS by Miranda Jarrett, Ross Howland, Earl of Mayne, believes that he’s found the perfect wedding gift for his younger sister: a play in honor of her betrothal to be given by a travelling theatre company. But when the ever-practical Lord Howland meets the ever-dramatic leading lady Cordelia Lyon, sparks fly in every direction. Can such star-cross’d lovers find happiness together, or must they part at the final curtain?

HIGHLAND HANDFAST by Joanne Rock moves to the 14th century for a story of redemption and passion denied. After imprisonment at the hands of the English king, feisty Scotswoman Brenna Kirkpatrick wants her life back. Determined to build a future for her sons, widowed Brenna vows she will not allow another domineering man to control her, no matter how tempting Scots warrior Gavin of Blackburn might prove. She only wishes to hire his sword arm, but Gavin’s price is nothing less than a handfast arrangement for one year. If she agrees to his terms, will she ever find the independence she craves? Or will the enticement of Gavin’s kisses be too great to resist?

“‘Highland Handfast’ pairs a charming, irresistible hero with a strong heroine worthy of admiration. Theirs is a poignant story of two wounded hearts and the healing power of love.” — Romance Reviews Today

“‘Highland Handfast’ will leave you breathless. Joanne Rock packs a lot of emotion and treachery into this captivating story.” — Romance Junkies

“Each story is wrought with high emotion and personal torment…draws the reader in completely.” — Romance Reader at Heart

There had been a time when Countess Brenna Douglas Kirkpatrick would have never paid a visit to Blackburn Keep without brushing and perfuming her hair, cloaking her brown mane in the best silken veils her father’s moderate riches could obtain. She would have pleaded and wheedled with her sister to borrow her best gown, a taffeta and velvet surcoat dyed in the deepest shade of purple, because Brenna fancied the rich hue complimented her dark hair more than Alexandra’s blond tresses.

Once upon a time, Brenna’s heart would have pounded with feminine anticipation the whole way to Blackburn Keep, her pulse unsteady as she indulged in girlish hopes for a future with the strong and silent Scot whose legendary sword had kept invading English forces at bay when he was a mere nineteen summers.

Yet today Brenna rode hard through desolate moors and dense thickets in the inky blackness of night, heedless of hawthorn branches slapping her cheek or frigid creek water splashing against her calves as she raced to see the very same man. Frosty Highland winds burned her skin and whipped through her uncovered hair, the damp breeze penetrating a threadbare cloak. The leather of her worn boots provided little protection from the brooks overflowing with newly melted snow, the water seeping through cracks too numerous to patch any longer.

And although her heart pounded at a furious rate, the relentless thump had naught to do with the Lord of Blackburn whose keep rested just beyond the next hill. Nay, her blood raced with hot fury through her veins for another reason entirely.

Swallowing back the cold wave of dread that threatened, Brenna used the surge of emotion to nudge her horse harder, faster, over that last barrier between her and the only man she could turn to for help. Tears stung her eyes as she rode, but she told herself the damp streams coursing down her cheeks and streaking back into her hairline were caused by the crack of bitter mountain winds against her tender skin and not an outpouring of soft emotions she could ill afford. She intended to wall off her fears and feelings for now, a technique she’d perfected in the last three godforsaken years of her twenty-three summers.

Because although she would give Lord Gavin Blackburn anything he required in order to secure his assistance just this once, she would not hand over the last scraps of her pride along with it.

She might not be the spoiled daughter of the noble house of Douglas anymore, but she still retained her noble bearing despite the yoke of an unwanted marriage, the realization that her dead husband was a traitor, or the hardship of English imprisonment these last three years. No matter what life had doled out for her she had clung to her pride— in herself, in her father’s clan, and in her country. For no matter what her traitorous husband said to the contrary, Countess Brenna Douglas Kirkpatrick had always been a loyal Scot to the bone.

Brenna had traded her soul to hold her head up and make such a claim, and by God, no man would take it from her now.

There would be no indulging of weak emotions until she’d retained Gavin’s help to recover the only precious thing left in a world that had forsaken her.

****
Gavin Blackburn sat bolt upright in his bed, awakened by a sound. A movement. He could not be sure.

Fingers flexing against the crisp linens his servants had dried in the cold mountain winds the day before, Gavin held himself perfectly still. Listening. Waiting.

His hound, Rowan, tensed on the floor beside him. Even in the dark shadows of his bedchamber lit only by scant moonlight that told him the hour was well past midnight, he sensed something amiss in his keep. Rising from his bed, he didn’t have long to wait to discover the source of his unease.

A feminine voice raised in anger lifted through the gallery to echo off stone walls.

For the first time in a year, a woman had entered Blackburn keep.

An interesting turn of events since his gatekeeper, young Alister the miller’s son, had strict orders to admit no one. And Gavin didn’t believe for a moment any of the village women would be foolish enough to enter the keep these days. They knew of his peculiarities. Respected his wishes. Left him alone.

Nay the woman in his hall could only be an outsider. And heaven help young Alister if her purpose was treachery. The English had been known to use the lowest means to gain entry to Scots fortresses, and considering the way they had treated Scots noblewomen taken captive during Robert the Bruce’s bid to free Scotland, Gavin would not be surprised if they resorted to using women as a way to distract young gatekeepers.

Pulling on his braies and shrugging into a tunic, Gavin did not bother with a hauberk as he leaned down to pat Rowan’s head. He didn’t even take time to tie his garments about him, assuming any woman who entered his keep past midnight without an invitation could damn well suffer his lack of attire. Gripping his sword grown ice cold in the drafty chamber, he stepped out onto the gallery just in time to collide with Kean, his bailiff.

“I told Alister ye would kill him dead, my lord.” Kean followed Gavin down the corridor leading to the stairs while Gavin craned his neck for a glimpse of this woman who— by the low fury of her tone— seemed to be raising bloody hell.

He could see naught but a few long shadows below, since he had never seen a need to burn tapers all night.

“Did she give her name?” Gavin hit the steps at a brisk pace despite the fact that the stairs disappeared into blackness. “Lay a fire in the hall and make sure Alister knows the gate willna open again this night or I will personally toss him into a deep patch of poison ivy until next winter. Ye ken?”

“Aye.” Kean nodded vigorously beside him, already moving toward the fireplace as they reached the bottom of the stairs. “And her name is—”

“Brenna.” The woman herself stepped in his path, her face materializing from the shadows in the dim light cast from two narrow candles that provided the only illumination in his great hall after midnight. “Brenna Douglas Kirkpatrick, my lord, and I would have never come at this hour if I did not seek your aid in the most dire of quests.”

Dear God, she hadn’t needed to say any more than that…