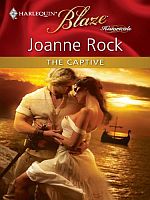 What’s a little bondage between enemies?

Women should be sweet, mild mannered…docile. Unfortunately, Lady Gwendolyn, a rich Saxon widow, is none of those things.

And Viking warrior Wulf Geirsson wants her desperately! One glimpse of the brazen beauty scrambling over the castle ramparts, and he knows he has to have her. Especially when she takes a tumble and lands at his feet.

But Wulf quickly finds that taking Gwendolyn and keeping her are two different things. And once she decides to engage in a seductive assault of her own, he’s the one captivated.…

“The story line is fast-paced from the moment Wulf sees Gwendolyn and never slows down until the final confrontations. Readers will be held captive by Joanne Rock’s superb historical.” — Genre Go Round Reviews

Some called it the Dark Ages, a time when the strongest men rose to power by the might of the sword and indomitable will. It was an era of Anglo-Saxon kings and wars for dominance on the fertile shores of England. A young Alfred the Great ruled the Saxon kingdom of Wessex, the only British sovereign to carve out an uneasy peace with the most feared warrior race in the known world.

Fierce and proud, the Norsemen came bearing swords and axes, strength and daring. Among them, one man risked more than any other, his name whispered by his enemies like that of a demon beast no one wished to conjure. He was Wulf Geirsson, heir of the ruling class, banished from his homeland for crimes shrouded in mystery. He went on to conquer lands far and wide, followed by men loyal to him alone. Who would have guessed this fiercest of Vikings would face the battle of a lifetime at the hands of a lone Saxon woman armed with no weapon save a daring to match his own?

Chapter 1
“If I have to embroider one more rose petal, I will unsheathe my eating knife and run myself through.” Gwendolyn of Wessex tossed aside the linen nightgown she’d been suffering over for hours.

She despised needlework in the first place. And in the second, why bother making a night garment a work of art when her future, yet-to-be-named husband would only shred the thing off her anyway?

The ladies who sat with her on this warm spring day were more like soulless jailors than noblewomen who embraced the happy state of widowhood as much as she did. Gwendolyn had never mourned the cruel knight who’d been foisted on her at eighteen summers, a man who had adopted the custom of keeping concubines while battling their Norse enemies. Gerald had died at the end of a Norse blade some moons ago, leaving her widowed, but waiting for the hammer to fall and her overlord to announce another marriage.

What she wouldn’t give for her life to be her own. For her future to be in her hands! She’d been taught young to think for herself thanks to her parents, wealthy scholars who’d traveled the world. Their deaths on the road to Rome had devastated her. She’d spent the rest of her childhood in the custody of Richard of Alchere, an ambitious earl who’d shackled her into an advantageous marriage at the first opportunity – only to find her widowed on his doorstep two summers later.

Now the power-hungry earl was so busy kissing King Alfred’s royal rear, she feared what scheme the two might script for her next union.

Richard of Alchere was the most powerful lord in Wessex, and he protected a key stretch of the coastline for Alfred. Alchere had been her father’s neighboring lord before his death, Richard had made a fast grab for power by bringing her into his household.

While their lands may have been a neat fit against each other, Alchere’s militant and unimaginative household bore no resemblance to the worldly and exotic haven her parents had ruled. Once upon a time, they had hosted scholars from all over the world to share ideas and study in their expansive library. Alchere, on the other hand, wasn’t smart enough to see beyond the point of his sword. He ruled with brute force, however, and King Alfred needed military might as much as he needed scholars. Well, he needed that more, truthfully.

That accounted for why Gwendolyn found herself back in proud, vain Alchere’s keeping again now that her first husband had died. She’d sent a messenger to Richard of Alchere the moment she’d heard of Gerald’s death in battle, knowing Alchere would gladly send for protection for her to return to him. This she did, much as she disliked her overlord who thought himself overly important. Better in Alchere’s hands than to wait around for Gerald’s family to try and claim her inheritance. She’d packed up everything she could carry and fled the whole vicious clan.

Now, Alfred kept track of her vast inheritance once again, but Alchere kept her safe in his prison of a cold keep, watching over her while he protected a handful of other valuable widows. Her former in-laws would never touch her here, but peace came at the price of her freedom.

She tipped her face into the warm sunshine filtering in through high windows overhead, but the group of heiresses been consigned to remain indoors due to fear of raiding Danes spotted along the coast.

“Lady Gwendolyn, what will your future husband think if your trunks are packed with naught but old gowns sewn while you were wed to another man?” Lady Margery currently hunted for a third spouse, so she considered herself an expert on the matter of husbands. All the rest of the old hens looked up to her for that reason.

Not that any of them were ancient. Margery held the distinction of eldest at twenty-four summers. The five women had been herded together by their king during wartime to keep them safe since they were a valuable lot. Each of them represented opportunities for important political alliances upon remarriage and as such, they required protection from the Norse raids all over the coast. Three of the women had lost their husbands to the bloodthirsty invaders.

“I do not even have a marriage contracted,” Gwendolyn pointed out for the tenth time in a fortnight. She’d put forth a great deal of effort to keep it that way since the idea of another marriage made her blood run cold. “And if I did, he would surely ignore my bridal clothes in the rush to the marriage bed anyhow. Why would any man care about the needlework on a lady’s nightgown when their only interest is ripping a woman’s garb from her body?”

She shivered with distaste. Gerald had handled her roughly those first few months of their marriage. Later, when he’d gone back to his concubines, he’d visited her less often, but his touch had remained abhorrent. Painful. Gwendolyn could not understand why some women spoke of marital pleasures with blushes and giggles. She’d found no tenderness in her husband’s bed.

“Perhaps,” Lady Margery began, peering over the tapestry she embroidered along with the others, “that is why the earl finds it such a difficult challenge to obtain a good marriage for you. The poor man does not think you will be able to behave with any sort of decorum for the summer let alone a whole year.”

Gwendolyn closed her eyes to let the inciting comment wash over her rather than box the woman’s ears the way Margery fully deserved.

Once the other women stifled their giggles, Gwen shot to her feet and circled the benches they’d drawn up next to each other, wishing she could run on the fresh green grasses outside rather than pace a musty old hall. The lack of activity imposed by the king’s men combined with the need to keep a civil tongue would make her sheep-brained in no time.

“The earl is not finding it difficult to contract my marriage.” Her youth and her wealth made her a sought-after bride, if nothing else. She did not deceive herself that men wanted her for her submissive manner or extravagant beauty. The years with Gerald had only made her more fiery—unwilling to cater to any man. “I have been actively bartering with Alchere for more time to consider the candidates so I might weigh in on his decision for my next spouse.”

At least, that was the version of events she preferred. And it contained some truth. But Margery put down the corner of a small tapestry she worked on to better lift her snooty nose in the air.

“Lady Gwendolyn, we all know the earl asked you to remain out of trouble for a full year before he’d ever consider letting you choose a husband for yourself.” Margery’s gaze returned to the patch of needlework where she stitched the outline of a pasty-faced maiden. “He only offered such a boon since he is certain you will never fulfill your end. We all know you’ll be wed to someone, whether you will it or nay, before next harvest.”

Ah, another nip to Gwen’s leg. Or did that count as ten? She only wished she could impart a swift kick to this particular bothersome dog. Gwendolyn had a bit of a reputation for mischief-making, and she’d never been able to resist an opportunity to tweak her overlord’s arrogant nose. Of course, she’d lived in Alchere’s awful stronghold for far more years than these widows who came and went under his all-mighty protection, so she knew how wretched he could be. His tempers were notorious and his dictates ranged from unfair to downright evil, forcing her to burn books that she’d inherited from her father’s household so that she would not grow “too self-important with knowledge.”

The book burning had nearly killed her. Could she help it if during her youth she took what revenge she could by occasionally adorning his ugly mug with beauty paints while he slept off too much drink? Or tucked the bones he discarded onto the great hall floor inside his boots so the castle hounds gnawed him mercilessly?

None of the other women understood her long and frustrating relationship with Alchere, however. They only saw that she baited the man wherever possible. So a retort rose quickly to Gwen’s tongue to set Margery straight on the matter of Alchere, but it was cut off by the abrupt opening of the hall’s doors from the other side.

A page of no more than eight or nine summers burst through the entrance, his eyes wide.

“Ladies, you must hasten to the keep.” He did not bother with courtesy, but began grabbing their embroidery to carry away. He spilled a basket of threads and stepped on the corner of a half-finished tapestry. “The Norsemen’s boats make their way close to shore.”

Gwendolyn forgot all about her quarrel with Margery and the soul-smothering boredom of the women’s conversations about husbands. She understood the danger the enemy presented. Viking raids had cost many lives, much gold, and countless maidens’ innocence. These invading warriors were brutes that had terrorized lands far and wide. The only part of England where they did not have a toehold was Wessex, as King Alfred had made a pact to keep them away.

But when you bargained with devils, who was to say they would honor it? Only a fool wouldn’t know fear…