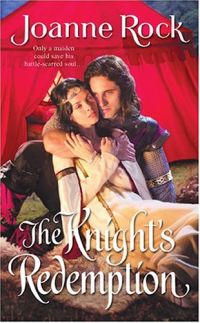 The Curse of Spinsterhood Lay Upon Her…

But Ariana Glamorgan swore she would dispel the fog that clouded men’s minds and be seen as she really was— particularly by Roarke Barret, a knight of great prowess beset by sorrows of his own. For prophecy foretold him as the true husband of her heart.

“After focusing on Roarke’s half-brother, Lucian, in The Wedding Knight (2004) Rock, a RITA Award nominee, now gives Roarke a lady of his own as she deftly choreographs the delicate dance of seduction between her two protagonists into a richly sensual romance kissed with a bit of magic.” — John Charles, Booklist

“A highly readable medieval romance with an entertaining touch of the paranormal… The plot is pleasantly complex, the setting well developed, the heroine and hero traditional and romantic and the ending happily interesting.” — Romantic Times, 4 stars

“Her historical romances are vibrant — filled with likeable characters and settings that are not as commonly used. There are plenty of English settings, but Ms. Rock takes her readers to Wales in 1260. The fresh setting, enjoyable characters and delightful romance are not to be missed.” — Roundtable Reviews

“Joanne Rock does it again with this gripping tale of knights and ladies. The Knight’s Redemption is a fabulously sultry story…” — Romance Junkies

“Full of mystery, action, romance and a truly dramatic and heroic ending that had me closing the book with a sigh, a smile and a yearning for another Joanne Rock book.” — Fallen Angel Reviews

“The knight we have dreamed of enters the realm before nightfall. Do not let him escape you.”

Though the whispered words emanated from the lips of a dazed old woman, they were of grave import to Ariana Glamorgan.

“A man?” Shifting closer to the drowsy figure on the hard wooden bench, Ariana touched the seer through the fog of hickory-scented smoke wafting from the stone hearth, hoping to gather more information before the trance dissipated. “At Glamorgan?”

But the wise woman’s gray head drooped forward as if in sleep, and Ariana knew her mentor’s revelations were finished for today.

“Arise, Eleanor.” She shook the healer gently, frustrated she would learn no more about this mysterious newcomer and eager to test the truth of the woman’s vision. “I must return to the keep.”

Full blue skirts swirled around Ariana’s feet as she stood and gathered her things from the small wooden cottage. The fustian gown was rich and obtrusive to wear while sneaking about the forest, but Lord Glamorgan insisted his daughter don nothing but the finest garments.

One of many ways he restricted his only daughter.

Impatiently, she pushed up the heavy lace sleeves and collected the herbs Eleanor had mixed before she took up her seat in front of the fire in a search for prophetic visions.

The old woman woke with a start, her gaze focused and penetrating as she peered into Ariana’s eyes. “I have foreseen a foreigner’s arrival, child. He may be your only chance to break the curse.”

Ariana hesitated, gazing into the beloved older woman’s eyes. Eleanor had been her nurse. Her mother’s nurse. But that had been before her father banished the old woman from his keep when she failed to save his wife with her healing.

“You do want to free yourself from the Glamorgan legend, do you not, my dear?”

Desperately. She had endured her father’s bitterness and the suffocating atmosphere of her doomed household long enough. Having given up any pastimes that would bring her pleasure within the confines of Glamorgan, Ariana still pursued her love of music in secret, retreating to the forest to sing and to seek out the wise woman for her counsel and for lessons in the healing arts.

Now, she would give anything to break the cycle of unhappiness that held her and her nieces in thrall. Whether the so-called curse of the Glamorgan women was real or imagined, the females of Ariana’s line had certainly experienced more than their share of heartache for nearly one hundred years. ’Twas whispered that long ago a Glamorgan woman stole another woman’s love. The spurned female cursed all the family’s daughters to spinsterhood, a fate that had claimed all of Ariana’s aunts ever since.

Twisting her fingers through the intricate adornment of her cuffs, she confided her biggest fear. “But what if this stranger is not well suited to me? ’Tis such a gamble to rest my future on the shoulders of a man I know nothing about.”

Pacing the dirt floor, Ariana hummed away her nervous energy in a halting rendition of a somber chant she’d heard at chapel, an ancient habit she’d never fully conquered.

“’Tis not as bad as all that, my girl.” Eleanor cast her a stern look, the weathered furrows lining her face deepening. “The situation hardly warrants a funeral dirge.”

Chastened, Ariana paused her song as well as her pacing.

“If you break the curse with a marriage, you will bless your brother’s daughters with a bright future as prospective brides.” Eleanor rose, her posture bent, but the tilt of her chin still proud despite her ancient years. She smoothed one leathery hand over upswept snowy locks. “Furthermore, you know your marriage was your mother’s greatest wish. Her last wish.”

Ariana chewed her lip in thought, needing no reminder of her final promise to her mother. “The girls deserve a happy fate.” Nervous fingers worried the polished amethyst stones strung about her wrist. “How can our futures rest in the hands of one man? A stranger to Wales, no less.”

Eleanor leaned close to whisper. “All of Cymru knows of the legend surrounding your family. Some of the locals even claim blood ties to the jilted lover who supposedly cursed your line when she was tossed aside for a Glamorgan bride. With that much history hanging over your head, no Welshman would ever dare to wed you even if he could see you for the fair young woman you are.”

Ariana sighed, knowing Eleanor spoke the truth. Her father never missed an opportunity to remind her of as much.

Eleanor moved toward her herb cabinet and began filling a little sack. “Your only hope is to capture the attention of a foreigner to our land. My vision tells me such a man arrives this very day. Even more fortuitous—he does not plan to stay for any length of time. Such an advantageous situation is unlikely to arise again soon.”

“Aye.” Ariana’s belly churned with an equal mix of nerves and anticipation. The thought of escaping her oppressive household held great appeal, but the danger of finding herself tied to a man more acrimonious than her father distressed her. “But I will not even try to catch his eye if he looks to be cruel or harsh in his nature.”

Well-worn hands patted Ariana’s smooth ones. “You will do what is best, I am certain.”

Nodding, Ariana pulled open the door before turning back to the wise woman. “What if I cannot make myself attractive to him? What if this whispered curse of the Glamorgan woman is truly at work tonight and the man sees right through me? And even if I can intrigue this stranger, Father will not let me marry.”

Thomas Glamorgan’s hateful disposition demanded everyone around him suffer fully for the weight of his family’s curse. Ariana knew he would never consent to burdening some unsuspecting stranger with the millstone of his bewitched daughter. No, he would far rather suffer and wail about his fate than try to change it.

The old woman handed her the small cheesecloth sack she’d prepared and smiled with the knowing of Eve. “I’ve taught you how to use these herbs before, my child. They can help you in your quest. And if it is meant to be, you will know. All obstacles will fall away if Fate wishes to see you wed.”

A tremor of fear skittered down Ariana’s spine, followed quickly by a strong dose of resolve.

“Thank you.” She kissed her friend’s cheek.

Gathering her cloak more tightly about her, Ariana stepped out into the misty afternoon, a morose ballad of star-crossed lovers on her lips.

Peering into the deep green forest before her, she willed her eyes to see through the thicket of oak trees to Glamorgan, to discern this mysterious knight for herself, but her ability with the Sight could not be forced. As fickle as Welsh weather, her limited gift allowed her to see things only at the most inconvenient times.

She would simply have to see the man for herself.

Stuffing Eleanor’s linen pouch full of herbs into her troublesome loose sleeve, Ariana hurried toward the keep and wondered if this would be the night she would meet the warrior of her dreams…