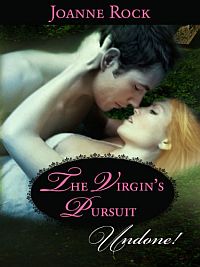 Exiled noblewoman Isolda of Iness longs for the one thing her forest home cannot provide—a baby to inherit her family’s lost lands. She has already chosen the virile hunter who visits her woods to father her child, intending to lure him to her bed before quickly sending him away. Besides being young and handsome, the stranger also warms Isolda’s untouched body with a desire she has never felt before….

The potion tasted bitter, but the result would be the sweetest blessing imaginable.

Isolda drank it down in one gulp and shuddered, her eyes focused on the second half of the equation that would bring her heart’s desire. She imagined this one would taste far more pleasant.

Peeping over a low-hanging branch from her hiding place just outside her woodland cabin, Isolda of Iness watched the hunter as he prowled through the forest. Tall and powerfully built, he moved with surprising silence over fallen tree limbs and dead leaves. He was young. He was virile.

He was the perfect choice to be the father of her baby.

She had watched him hunt her woods for many moons, and had long admired his respect for the animals. He never took more than he needed, and he always treated the land and its creatures with care. In a world gone crazy—with wars and violence everywhere she turned—Isolda had come to value a strong but gentle hand in a male. She knew what a rarity her hunter was and she would have no man but him give her the one thing she could not provide for herself in the forest home she’d come to love since her self-imposed exile.

The longing for a babe had started even before her retreat to the woods. Norman invaders killed the neighboring lordling she should have wed. Even though she had not loved the man or the match, she had looked forward to becoming a mother before all of Northumbria was cast into turmoil.

Nearby, the hunter paused. His thick muscles bunched. He turned.

She had never ventured this close to him before, always keeping her distance and making herself disappear when anyone passed near her well-hidden hut. But today, she wanted to be seen. Noticed.

She’d planned for this moment over and over again—how to win him to her bed to achieve her heart’s desire, yet send him on his way again without undue interest in her life. Her past. Her precarious position as an exiled noblewoman.

What kind of life would it be for her child if her true identity was discovered? No. She had to be very, very careful. Discreet. That meant she couldn’t approach him like a high-born woman accustomed to sweet manners and courtly deference.

She would throw off her mantle of decorum for the sake of the babe she wanted so desperately. A child that she would nurture to strength in the safety of the woods until her heir was strong enough to claim the Iness birthright.

That meant she would approach the hunter with the earthy charms of a young kitchen maid or an experienced widow. If only she had observed such interactions more carefully instead of averting her eyes to the occasional lovers’ games that played out in darkened corners of the hall or shadowed nooks between the corridor tapestries.

Now, the hunter’s tawny gold gaze swept the tree line, penetrating the thick hedge of thorny brambles she’d trained all around her tiny thatched dwelling. Her heart pounded with a strange excitement that plagued her only when she laid eyes upon him. She told herself it was because she knew he was the key to her success if she wanted to have a baby.

Yet she’d never experienced such a reaction when she’d been in the company of her betrothed before her world fell apart.

“Who’s there?” The hunter spoke and his voice was a new sound to her. He’d always been silent in the past except for the occasional whistle to his merlin if he brought a bird for hunting.

The timbre of his smooth, deep bass hummed all around her, echoing through her veins. The welcoming reverberation calmed her and helped draw her feet forward.

Her body accustomed to the thorny hedge, she ducked and drifted easily through the maze of sharp obstacles until she stepped clear of it. Into sight.

“Greetings, sir,” she started, unsure of her words, but injecting a note of husky warmth into her voice. “Your journey must be a long one to venture so deep within the woods. Fare you well?”

He studied her in silence with the same predatory stillness she’d observed in him many times when he stalked his prey.

She’d never been so close to him, nor had she ever viewed him so keenly before. He had the lithe strength of a stallion with his sleekly muscled grace. His dark looks were not the foreign variety of the Norman invaders, although his tawny eyes were unusual for a Scot. Thick, dark hair shone with good health and revealed good care of his person, one of many reasons why she’d chosen him for this task.

Garbed in the muted shades of the forest, the man’s dark braies hugged muscular thighs and ended around the taut bulge of his calf. His boots were laced up the ankle, the heavy leather protecting him from the thick forest brush and enabling him to tread with utter stealth.

His tunic sported a crude hue that many a crofter would wear in the field. Yet the fine pleats and embroidered embellishment about the placket conveyed a far higher status. A deposed nobleman? The thought struck a deeper note of fear. Nay. No nobleman hunted the woods alone as often as this forest warrior. His sword was simple and free of gems and scrollwork. A rough leather strap served as his belt with a functional eating knife at the hip.

Surely this hunter’s position leaned more toward a successful trade.

“My journey has been long,” he admitted finally, his finely sculpted mouth capturing her attention as he spoke. “Have I ventured near another town to meet a fair maid I’ve never spied before?”

“I wash clothes in yon river,” she lied, pointing away from her cottage to help ensure he did not know where she lived. With luck, he would think her a lowly washerwoman and never seek her out again, which would keep her babe safely in her care alone. Then, rousing her courage, she made a bold suggestion. “Perhaps you would like me to wash your clothes?”

As soon as she made the offer she realized she’d spoken a bit too softly, her tone lacking the brash flirtation she’d seen more experienced women use once upon a time. But the words themselves were so improper, she found it difficult to infuse them with any more suggestive meaning.

“You are unprotected here?” he asked, looking around the clearing for some companion. “Does no one accompany you?”

The concern in his voice alerted her to how badly she’d misjudged this business of seduction. He was not thinking about stripping down to nothing and taking advantage of her in the remote woods. He worried for her safety.

The notion touched her heart even as she feared she would not be able to achieve her heart’s desire. What if this man proved too noble to touch an unchaperoned maiden?

“My friends have returned to our village with the washing, but I have lingered here… hoping to see you.” She met his gaze with all the directness she could muster, allowing the carnal nature of her desire to show in her eyes.

When an answering heat fired in his expression, a tense awareness apparent in his limbs, she looked away again. She had not expected such immediate results from her admission.

“This is not the first time you have been in these woods.” It was no question. His voice, tinged with new understanding, stroked over her senses.

She merely shook her head in response.

“You take a great risk,” he chided, lifting a hand toward her.

Everything within her stilled. His fingers skimmed the fabric of her sleeve without grazing the skin beneath. Her flesh tightened and tingled with his nearness.

Heaven help her, she did take a great risk. What did she know about him besides his gentle respect for the forest animals?

“I have seen you walk with care through these woods before,” she admitted, her gaze fixed upon the broad column on his throat since she found it difficult to meet those tawny eyes directly. “Your demeanor did not suggest a need for fear.”

Her heart thudded strongly, the fertility potion she’d consumed adding to the dizzy sensation he inspired. She was not prepared for the brush of his fingertip beneath her chin or the gentle tilt of her jaw to face him.

“A woman can never be too careful alone with a man.” That heat she’d felt rolling off him before returned with new force, prickling her skin like too much time spent in the sun. “The lure of such sweetness can bring out the beast in any male.”

He warned her away, his voice turning as fierce as his gaze. But strangely, she had no wish to heed it. Something in that fiery expression of his only made her more curious than fearful.

“I have learned experience is a far more memorable teacher.” She raised her palm to his chest, hovering over his heart for a long moment before she found the power within to drag the fingers lightly along the hard plane of muscle.

She had witnessed her cousin tease a young groom thus once, and that man had been noticeably affected. Would her touch prove as tempting to the hunter?

“What game is this?” His eyes narrowed and then he released her chin to grip her hand in his. “If these are the hands of a laundress, than I am the king of the realm.”

He smoothed his thumb along her palm, making wide circles that spiraled and narrowed until he reached the heart of her hand. Only then did she realize her error in the lie. For while her hands were no longer the smooth, unblemished mark of her rank, they also lacked the deep red, irritated flesh of a laundress who worked in lye and frigid water that chapped the skin.

Her cheeks flushed hot from the untruth, but she could not lose him now. She had been drinking her potion for a fortnight, preparing herself for this meeting when her moon cycle would yield the most fertile.

“You do not play enough games, sir, if you find this one objectionable.” Taking a deep breath, she willed her heartbeat steady along with her nerves. “Does it matter how we come to be in one another’s path so long as we both enjoy the diversion?”