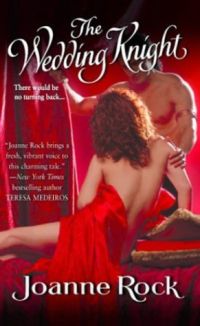 Melissande Deverell knows convent life is the most liberating path for any free-spirited woman. No vainglorious tales of men’s battle prowess at meal times, no filthy warrior’s bed to share, and the best education available to women. Abandoned to a remote Alpine nunnery since the age of eight, Melissande finds fulfillment supervising the convent’s orphans and translating manuscripts.Life is perfect until a wayward knight steals her away from all she holds dear.

Lucian Barret never expected to be even mildly attracted to a convent bound novitiate. Then again nothing about vivacious Melissande is what he expected. Honor-bound to deliver her safely into the arms of another, Lucian’s dark past leaves no room for attraction to a headstrong would-be nun. Now he has no choice but to protect her on the journey to England, a constant temptation within arm’s reach. Even if he manages to keep her honor— and his heart— intact, he begins to wonder if he will ever be able to give her up.

“Rock proves once more that she is a virtuoso of her craft.” — A Romance Review

“This is a must read for fans of medieval romance.” — AboutRomance.com: 5 stars

“This is a book that will forever have a place on my keeper shelf.” — Romance Junkies: 5 ribbons

If Lucian Barret had been a righteous, God-fearing man, he might have trembled at the thought of kidnapping a nun. Fortunately his faith in God had died two years ago, along with his foster father in a stale sickroom. Stealing Melissande Deverell posed no moral dilemma for him now.

Lucian dragged in a breath of thin mountain air and pulled a length of white muslin from his saddlebag to wrap around his face. Although he would reveal himself to his captive eventually, he didn’t want her to recognize him too soon and inadvertently betray his identity.

The good sisters of St. Ursula’s would not appreciate his plans for Melissande.

He peered through the generous chink in the loose rock enclosure to spy on the young nun. Studying her profile as she read from her book, he searched for affirmation she was the object of his quest. The graceful woman in the severely cut habit bore no similarity to the hellion he recalled from childhood.

Her demeanor radiated contentment and fulfillment, as if divinely called to life behind silent walls. The Melissande Deverell of ten years ago had screamed herself hoarse the day her parents announced she would enter a convent. She’d been rumored to have sobbed halfway to France once she departed England.

Confirmation of her identity came when play time began.

Lucian watched his quarry frolic with three children in the sun-filled gardens. The scene reminded him of his childhood with his brother Roarke and their neighbor, Melissande— two boys and one mischievous girl to lead them on a merry chase. After having read to the little sprites for most of the afternoon, Melissande now allowed them to run and romp. Flashes of his old impish friend became apparent as the young woman tumbled laughing to the ground under the gleeful attack of her small charges.

A glimpse of vivid red hair peeped from beneath the black wimple when she sprawled on the new spring grass. The grin playing about her lips spoke of vibrant life trapped within her Spartan cloak.

There could be no mistaking the woman Roarke demanded he retrieve from her convent hideaway in the secluded French Alps. The same woman whose deliverance would fulfill Lucian’s long debt to his brother. Roarke would not be disappointed.

As beautiful a maiden as he had ever seen, Melissande had blossomed into a prize who merited stealing. If Lucian were worthy to carry on the Barret family line, he would leap at the chance to possess such a wife to bear heirs. But that job he left for Roarke. Lucian would continue to pay his penance for the life he took with his sword. In spite of those who labeled the deed an accident, he blamed himself.

Remembering the need for swiftness in his plan, Lucian jerked the fluttering white muslin about his head to secure it. A sudden stillness permeated the convent garden.

He wrenched his gaze back to the happy tableaux sprawled on the ground and discovered Melissande had gone stiff and wary while the little ones continued their play.

She peered with intent eyes toward the crevice in the wall, as if she saw beyond the fractured rock to the danger lurking there for her.

I am saving her, Lucian told himself, needing that peace of mind to counteract the contented picture she presented as a nun.

Obviously startled by whatever movement she might have detected, Melissande spoke in a hushed voice to the children, hurrying them indoors.p>The time had come to act…