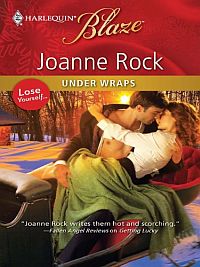 The Christmas feeling is in the air… and so is sexual indulgence!Marnie Wainwright started her fantasy escapes travel agency, Lose Yourself… to spice up boring dialing routines for others. But when she discovers she’s the subject of a deliciously hot private investigator’s surveillance, she suddenly starts living her own wildest fantasies. After all, what better gift could she get than a chance to spend the holidays at a quaint Adirondack Inn—which just happens to offer naughty playtime for sensually adventurous couples—with her sexy PI?

Jake Brennan should keep his hands off Marnie. But she’s delectable… irresistible! And the longer he keeps his desire under wraps, the more he wants her.

If only she wasn’t his number one suspect…

Lose Yourself… what you find might change your life.

Prologue
Normally, the last place Jake Brennan would want to be three weeks before Christmas was sitting on a stakeout.

He’d promised his mom he’d come home for the holidays this year, a pledge which made him a liar three years running. So now he sat in his SUV across the street from a suspect’s business in downtown Miami where neon palmetto trees took the place of white lights in the snow back in Illinois.

But when the stakeout involved Marnie Wainwright, there were perks involved. Enough perks that Jake didn’t mind watching the storefront for her business, Lose Yourself, from inside his vehicle on a Friday night. It didn’t matter that the rest of the world spent the evening at holiday parties downing frou-frou seasonal drinks and cornering women under mistletoe. Jake had Marnie for entertainment, and two months of surveillance on the entrepreneur behind Lose Yourself had taught him that was more than enough.

His hand hovered over the screen of his Blackberry where an Internet connection allowed him access to the camera he’d installed in her place eight weeks ago. Soft holiday music and Marnie’s warm, sexy laugh greeted his ears even before the picture on the video feed came into focus.

Thanks to the wonders of technology, he could sit on stakeout from two car lengths up the street and still see exactly what went on inside her high-end adventure company that specialized in exotic fantasy escapes.

And as long as Marnie was there, he always got an eyeful.

“If you’ll just run your credit card, you can pay the balance on the trip and I’ll mail you a detailed itinerary next week,” she currently said to an attractive middle-aged couple in front of her counter.

Marnie had a pen tucked in the swoop of cinnamon-colored hair piled at the back of her head. He knew from hours of watching her that she sometimes stuck as many as three pens back there at a time, occasionally losing all writing implements to her hairdo. His camera was hidden inside a bookcase he’d built for her two months ago back when he’d posed as a carpenter who helped her with a remodel of the front office. The carpenter skills had been fun to dust off after his years in the military and his time on the Miami P.D. Carpentry had been a long ago gift from his dad and it had come in handy for sliding in a hidden surveillance camera at Marnie’s business. At that time, she’d been a primary suspect in a white collar crime at Premiere Properties, her former employer. Vincent Galway, the owner of Premiere, was an old family friend of Jake’s dad and he hadn’t wanted to call the cops on Marnie, even though he’d fired her right after the embezzlement that cost the company 2.5 million.

Vincent only had very circumstantial evidence pointing to Marnie, but it had been damning. The missing funds had been funneled through her department and there had been a rise in client complaints about double billing. Coupled with her frequent overtime, easy access to the accounts and constant work outside the office, Vincent had let her go for superficial reasons – easy enough to do since Florida was an “at-will” state for employee termination. Then, with Marnie out of the company and none-the wiser as to why, Vince had asked Jake to quietly investigate a few key remaining employees and to keep his eye on Marnie, too. While Jake hadn’t found the missing money yet, he had leads.

Today, he had the distinct pleasure of taking Marnie off the list of principal suspects. Something he couldn’t even share with her since she’d never known she was under suspicion for anything in the first place. Still, Jake thought of today as a damn happy occasion because clearing Marnie meant he could finally do more than just watch her from afar.

His eyes locked on her luscious curves as she came out from behind the counter to shake hands with her clients. Yes, the time approached where he could return to her life – as the carpenter she hadn’t seen in two months – and ask her out. He could remove the surveillance equipment easily enough if she left the front office for even a minute.

There’d been a definite attraction between them when he’d first met her, an attraction he would have never acted on while she remained a suspect. But now, the path was clear. He could act on the fireworks he’d felt when he’d been in her office two months ago building that bookcase for her. If anything, he admired her all the more now after watching her pull her life together in the wake of losing a job and getting dumped by the waste of space she’d been dating up until she’d been terminated. Marnie had defied the odds and opened her own business in a crap economy, using her travel smarts to her advantage in the new gig.

Smart. Sexy. And she’d be all alone inside in another minute once her customers left. Would he knock on the door as soon as they were gone? Or, knowing that she was prone to stripping off a few layers of clothes as soon as she flipped the “Closed” sign on her storefront, would he tune into the Blackberry a few minutes longer?

Heat crawled up his back at the thought. The need to be honorable warred with the urge to look his fill.

As she ushered her clients to the door, Jake figured he’d split the difference. He’d only watch for a minute and then he’d flip off the feed.

And this time, he wouldn’t settle for just fantasizing about Marnie. He’d follow up with a house call, because damn it, he wanted to see the show in person one of these days.

Yes, a very Merry Christmas to him…

Chapter 1
A detail-oriented, Type A personality, Marnie Wainwright took all necessary precautions. So she checked and double-checked the lock on the street-level door to her business. She closed all the blinds. She flipped the sign on Lose Yourself from Open to Closed.

Only then, in the privacy of the small storefront where she’d converted the back offices into a living space, did she pump her fist in victory and break out her best Michael Jackson spin move.

“Yesss!” She shouted her triumph, letting down her hair with one hand and switching the satellite radio tuner to dance grooves with the other.

Two months of hard work at Lose Yourself had paid off with her biggest profit yet now that she’d booked an African safari followed up by a beach getaway to the Seychelles for a wealthy local couple. Two months of non-stop trolling for clients. Sixty-one days of researching unique trip ideas to appeal to an increasingly competitive travel market full of selective buyers who could easily book online. But her idea to pitch one-of-a-kind fantasy escapes was working.

“How do you like me now?” She sang to a tune of her own making, rump-shaking her way into the back to retrieve a bottle of champagne she’d been saving from the days when her paycheck had been fat and the perks of working in promotions for a luxury global resort conglomerate, Premiere Properties, had been numerous.

She hadn’t salvaged much financially from that time, thanks to the bad investments she’d foolishly let her financial advisor boyfriend oversee. Little did she know then that he’d been even more clueless than he’d been charming, losing her hard-earned money almost as soon as she’d entrusted it to him. She’d been royally ticked off about that, but that had only been the prelude to him dumping her. On Facebook, no less. Apparently he hadn’t been interested in her once she lost her cushy benefits of the global travel at Premiere. At least she understood Alec’s reasons. She never had figured out why Premiere had let her go or how her department had been losing as much money as her boss had claimed. But she understood hard financial times. While losing her job had hurt, it hadn’t broken her.

Tonight’s profits proved as much. She’d taken her travel smarts from all those years criss-crossing the globe for Premiere and used them to match up adventure-seekers with just the right unique escape to suit them, whether that meant a spa trip to Bali or a backpacking around the Indus Valley. The inspiration for “Lose Yourself” had come from her need to do just that. Since she hadn’t been able to take a vacation from her own problems, she’d enjoyed helping other people find ways to do just that.

Ditching her suit in a celebratory striptease for the benefit of a life-size cut-out of a Hawaiian guy offering a lei to her, she tugged on a long black silk robe for her private after-party…

"Among the changing months, May stands confest the

WHOOO is it? Last night's walking companion was ki