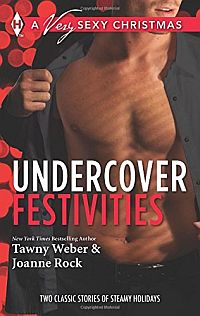 Sexy indulgence is in the air this holiday season in these two stories! UNDER WRAPS by Joanne Rock (originally published Decmber 2010 in Harlquin Blaze #582)

When Marnie Wainwright discovers she’s being watched by a deliciously hot private investigator, her wildest fantasies come true. Especially once she and her PI, Jake Brennan, spend the holidays at a quaint inn that caters to sensually adventurous couples. Despite the sexy play, she can’t shake the idea that she’s still his number one suspect!