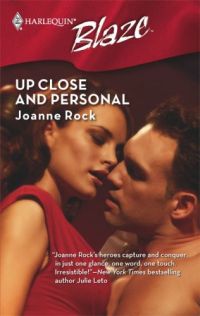 He’s good undercover… and under the covers.Posing as a live model in a sex class was bound to be hard—but Rocco Easton will, uh, rise to the occasion. The seductive moves of sensuality guru Jessica Winslow are no match for Rocco’s SEAL training. He’ll expose her scam—even if it means he gets a supercharged sex life out of the deal…

But things get weird when his sultry sex maven turns out not to be the con artist he thinks, but the victim of identity theft. Gone are his plans for getting even. Now he’s in protector mode. Because the identity thief is getting braver, pretending to be Jessica everywhere. Including his bed!

“A near perfect read… Up Close and Personal keeps you on the edge of your seat.“ — Fresh Fiction Reviews

“With a cutting-edge plot and two realistic and lovable characters, Up Close and Personal will capture her readers on page one.“ — CataRomance

Jessica Winslow needed to arouse a room full of women.

She took deep breaths in her small suite at the Hotel Del Coronado in San Diego, an accommodation with no view of the spectacular oceanfront outside. She’d booked this spot as a prep space for the retreat weekend she was leading during her biggest business coup yet. Eight women had bought into the extravagant “Better in Bed” series of workshops through Jess’s fledgling company. Who knew there would be so much interest in reclaiming your sensuality among wealthy, successful women who—seemingly—had the world at their collective feet?

“Do you need anything else, Ms. Winslow?” A sleekly tanned young caterer with a Spanish accent tucked a clipboard under her arm as she waited for Jess’s instructions.

“They’ve all been served and there is a small bar set up for refills like we discussed.” The woman tapped her fuchsia pink manicured fingernail down the itemized list on her clipboard. “Would you like me to bring you a glass of chardonnay?”

Jessica winced. Had her tension been that obvious? There was no reason for the attack of nerves since she knew her material backward and forward. Well, no reason except that setting her business venture apart from her family’s million and one get-rich-quick schemes depended on the good word-of-mouth generated by the attendees of this workshop.

After being raised well below the poverty line by parents who thrived on the adrenaline rush of skirting the law, the truant officer and even Social Services, Jessica craved the stability of her own business. And the fact that she targeted well-to-do women was no coincidence. She drank up the sweet scent of security inherent in their money, even as she made certain she had something of value to offer in return. Her business, Up Close and Personal, was no get-rich-quick scam but a labor of love that spiraled out of her need to give back the wealth of self-help training she’d received since escaping her past. Her birth family. And later, her foster family.

The wealthy women in the ocean view connected suites across the hall could make or break Jessica’s niche career with whatever they chose to share about this weekend at their respective country clubs come Monday morning.

Jess shook her head, refusing to give in to second-guessing. She’d have every woman in there eager to go home and jump the man of her choice. To do that, she needed a clear head.

“No, thank you. We should be set until it’s time to bring in the appetizers an hour from now.” She checked her antique watch, unable to delay the inevitable.

The timepiece slid around her wrist as she left the safety of her room, the jewelry a long ago gift from her father. One of the few he’d purchased honestly since he’d found it at a garage sale. Despite the rocky relationship with her lawless parents, she wore the piece purposely to remind herself she would forge a future all her own. On her own.

Jessica didn’t have a lot of opportunity to test her skills on real people, but she knew the methods worked since she could at least talk about sex again and feel the hormone rush of getting turned on.

Five years ago, she hadn’t been able to do either. A date rape in her teens had haunted her long after the night she’d been sexually assaulted.

The scent of the surf hit her along with the floral fragrances of a half dozen bouquets she’d ordered scattered around the room for ambiance. The whole suite had been draped in burgundy taffeta at her request. The dark colors and bright flowers were offset by the moody purple light from the sunset bleeding through the sheer curtains, but soon the walls would be lit solely by two cast-iron candelabra she’d brought here in the back of her Escalade.

The vehicle and the accessories were both part of her belief that image was everything in a business like this. High end consumers didn’t show up for retreat weekends at bargain hotels, and they didn’t expect their speaker to roll up in a decade-old sedan. No matter that the payments on that damn Escalade were killing her bank account. The cost of the accessories and the hotel space meant she would only break even this weekend, but if it generated more business…

Where the hell were her students? Jessica had been so busy admiring the way the d