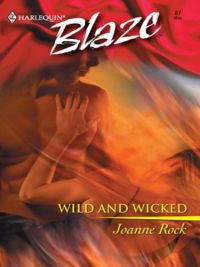 Horse trainer Kyra Stafford is tired of being Jesse Chandler’s lifetime best friend, silent partner in their horse boarding business, all-around confidante—everything but his lover. When an opportunity presents itself for her to take part in Tampa’s annual pirate festival, however, Kyra sees her chance to make Jesse notice her as a woman. Assuming, of course, he recognizes her when she’s dressed up as a pirate hussy to abduct him and have her way with him.

Jesse nearly pops an eyeball when he catches a glimpse of his former playmate in a corset. In fact, all Jesse can think of is how to make Kyra his playmate again, in a much more adult way. But he isn’t about to risk a friendship along with his business, even if Kyra has turned into a sex goddess with a penchant for role-playing…

“Wild and Wicked is a sensational sequel to Joanne Rock’s September 2002 release Wild and Willing. Jesse and Kyra’s story is a bit more intense, a bit more sensual but with the underlying romance that makes Joanne Rock’s Blazes an auto buy for me.” — Michelle Houston, Sensual Romance